Skip to content
Home » Uncategorized » We Should Have Seen the Signs 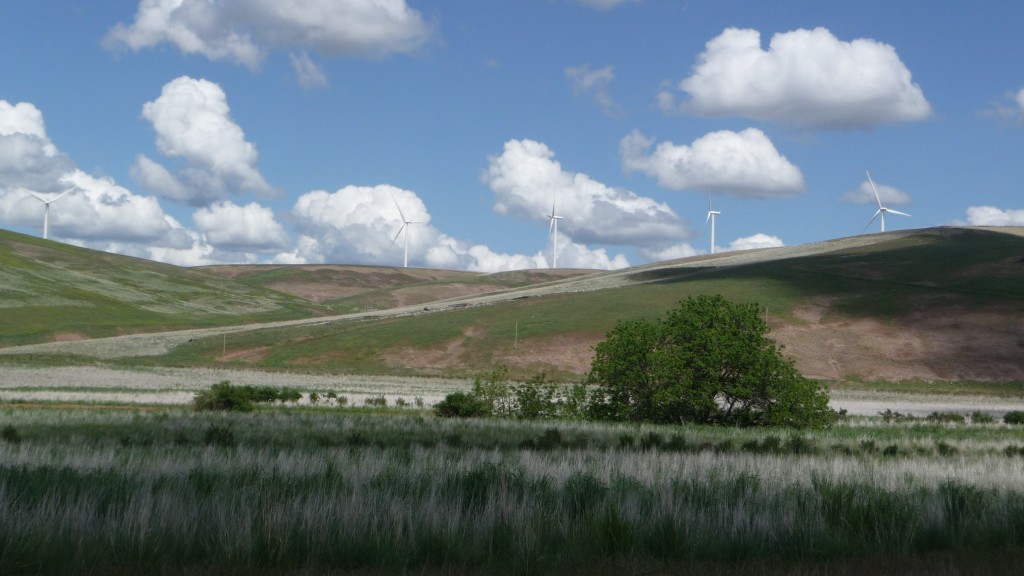 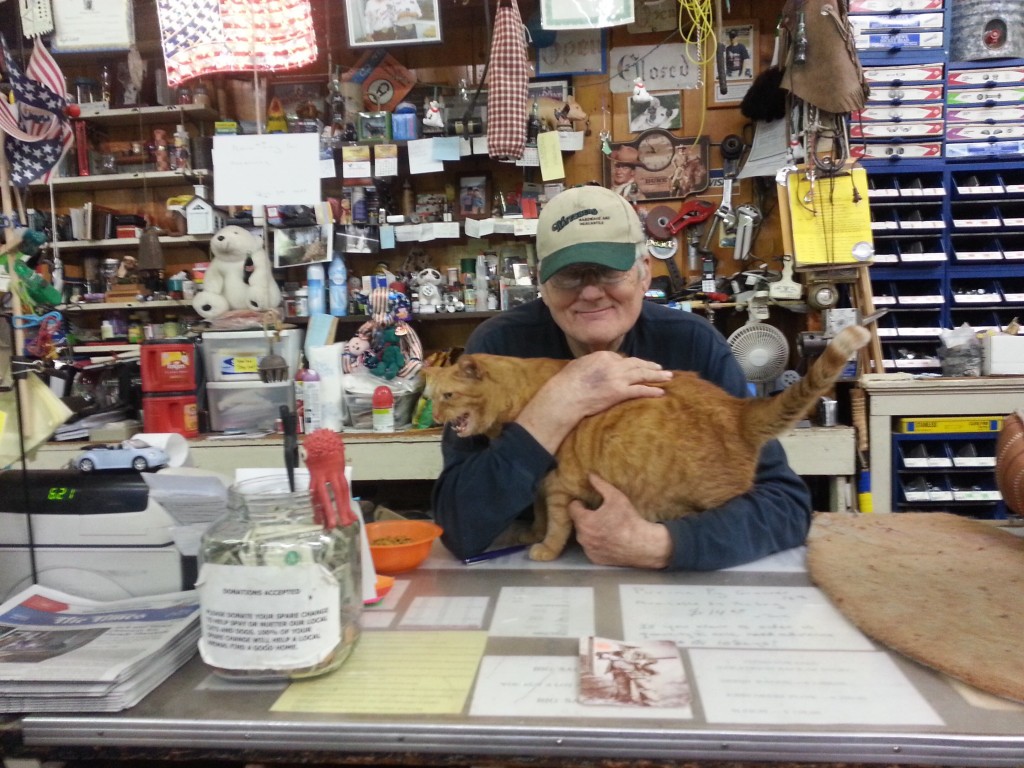 John and his monster cat Cougar, owner of Waitsburg Mercantile 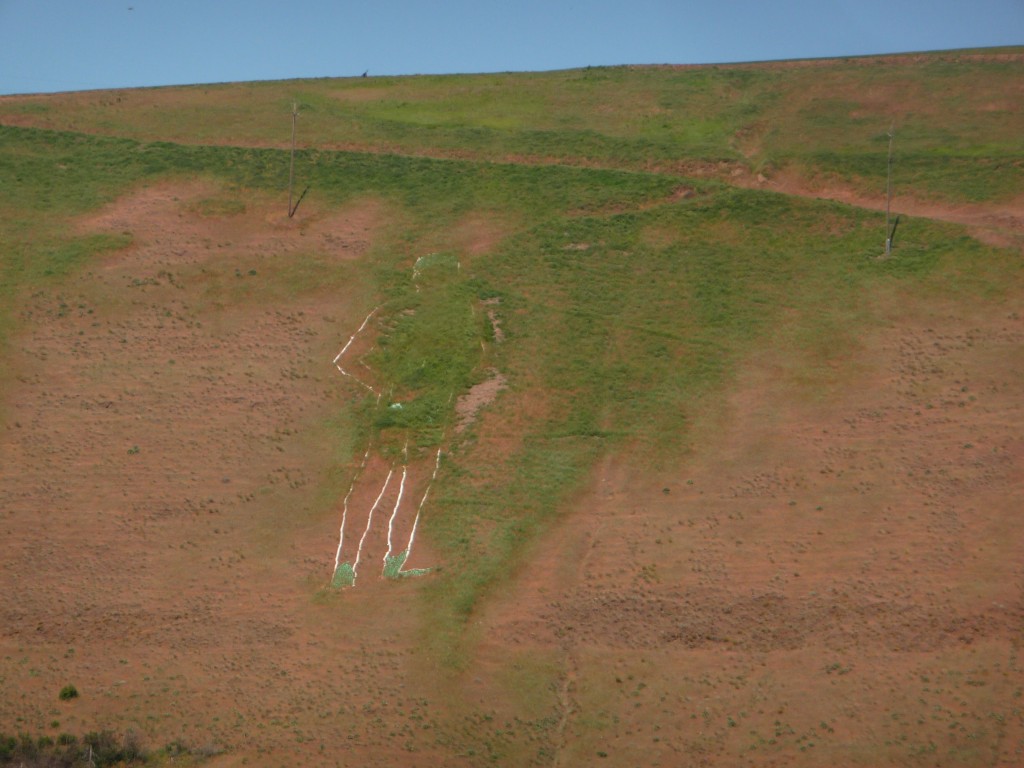 Someone in Dayton, WA, made this jumbo Green Giant, it reminded me of the Silver Chair

The other day, as we pulled into Walla Walla, a man and his wife whipped off the road to chat with us. They turned out to be Bob and Emma, our hosts through Warmshowers. Robert fired out an entire clip of complex directions to his home and drove off with us tailing along behind. Robert and Emma were the bests hosts ever. They did our laundry, fed us pizza, gave us use of their internet and showers . . . Also, Emma is from the Philipeans and uses this banana sauce instead of catsup, so Lizzy had a new condiment to add to her vegan hot dogs (also provided byBob). We even got to play with their lab pup Millie. It was quite fortuitous that we ended up there for the above mentioned reasons, but also because we awoke to a complete downpour. Bob let us stay in the basement and gave us an entirely accurate account of the roads ahead. We eventually left around 3:00. Bob, who was driving back to Walla Walla from Pomeroy, met us again on the side of the road and we had a final chat. That night we ended up in Waitsburg. 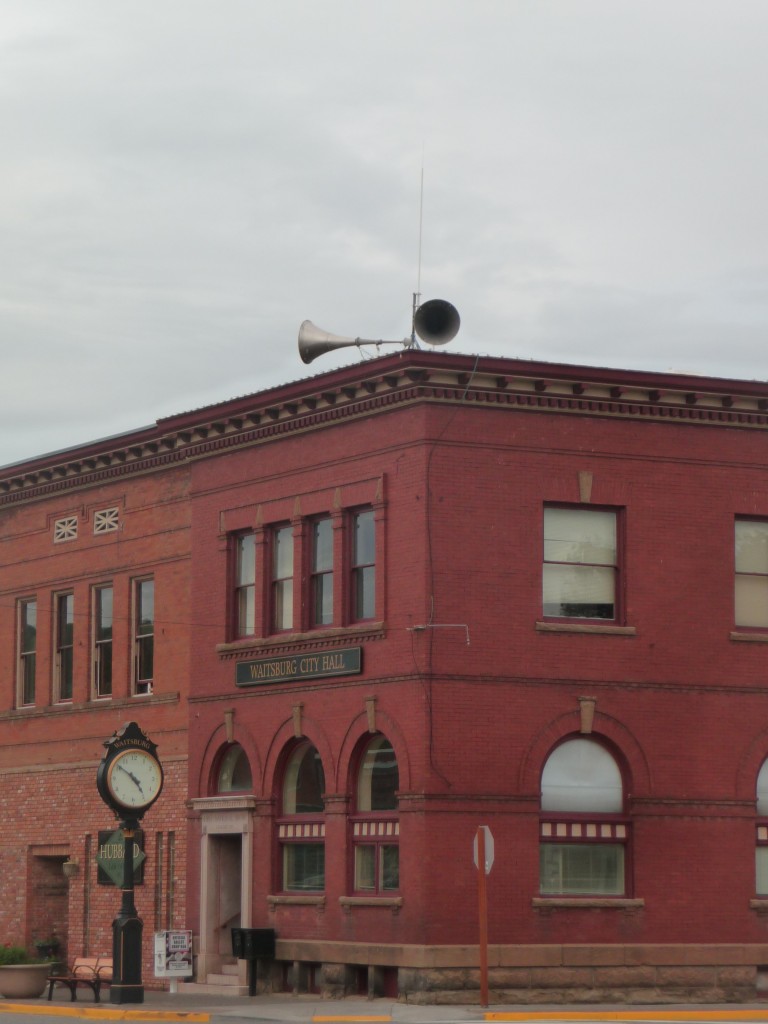 This Waitsburg building had some super horns. I forgot to ask what they were for

Lizzy and I were both blown away by Waitsburg. It is the only town in Washington that is still operating under its original territorial charter, and is celebrating its sesquicentennial this weekend. There will be a parade, performance by the men’s quartet, and I’m sure an appearance by Izzy, the town’s camel–because every town needs a camel! I found a brand new, unopened, fresh bag of Cheetos in the park too, something I take as a sign of greatness. We camped by the river and decided to get coffee from the local grocer the next morning. 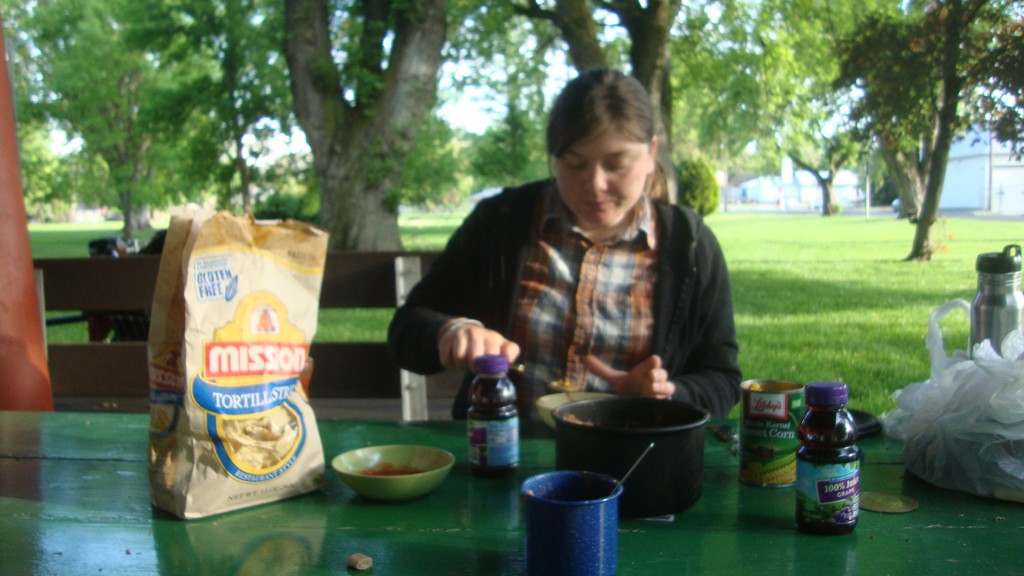 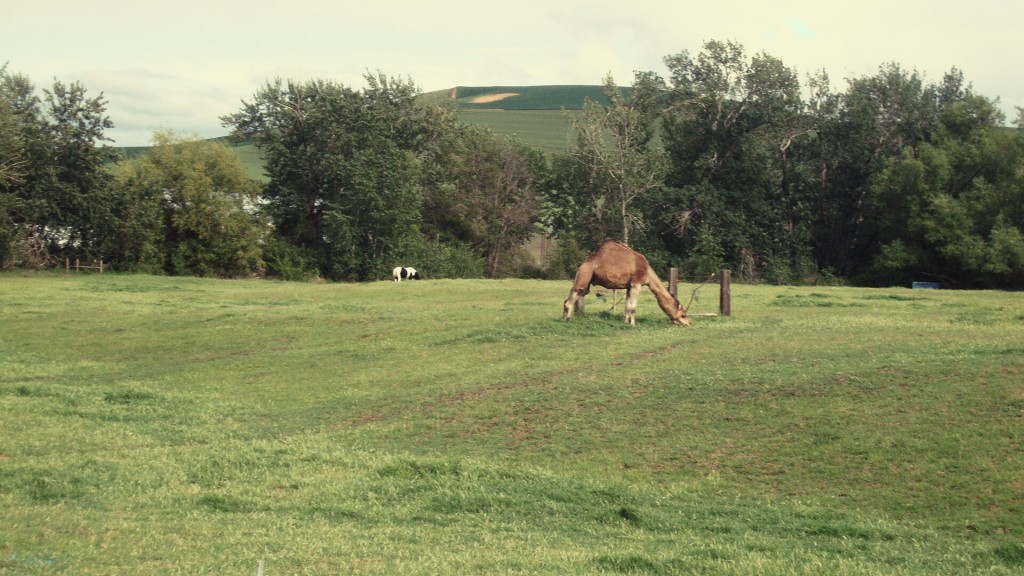 Most of the buildings in the town are original structures, and are really well maintained. We chatted with several of the locals and got to watch the installation of several bronze statues that will grace Main Street for years to come. While we were sipping coffee, I noticed an animal adoption sign across the street, so of course we had to check it out.

The animal adoption facility was part of the Waitsburg Heardwear and Mercantile, and is run by a wonderful man named John (he gave me a post card and a maple bar!) The store has been in operation for 103 years. John bought the store ten years ago, well before that he lived in Salem and ran milk samples in McMinnville.

His adoption set up was squeaky clean, which he says is the only way to do it. He had a 28 pound monster cat named Cougar, a blind cat, and even a cat with stub legs. Not sure how to describe it other than that. Seriously, the cat was full size with 3 inch legs. He called it the munchkin kitten. Cats aside, the store was awesome, just a little bit of everything you could need. He even had an entire isle for sturgeon fishing bits.

We left Waitsburg begrudgingly and pedeled out to Pomeroy. We were a little knee sore and bum-hurt by the time we got there. We stopped a terrible, outdated forestry service informational sign. We also stumbled upon a man’s private enamel sign collection/Pomeroy museum, and then a mini mart where we  got ice for our achy knees. 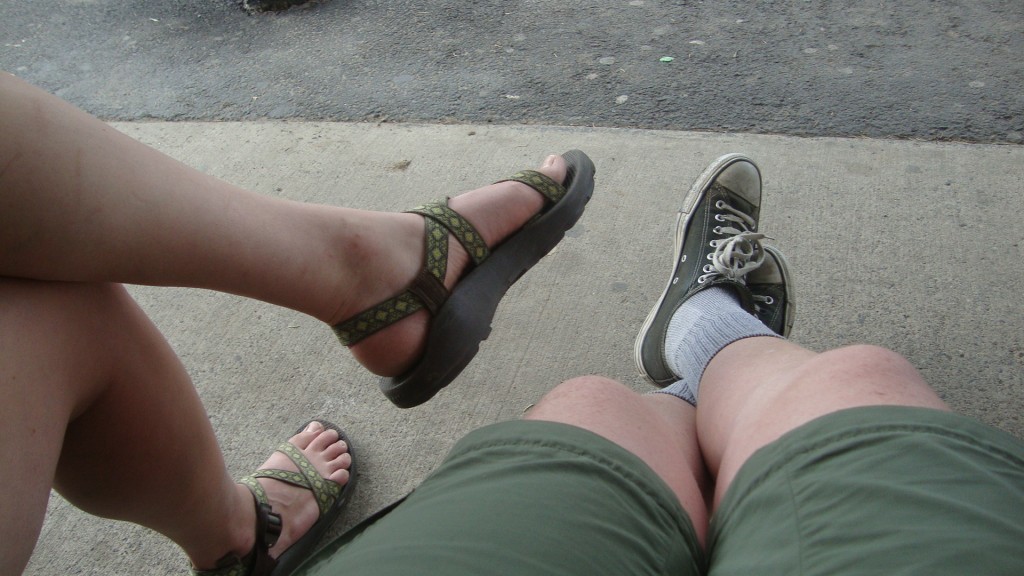 sittin on our butts, giving our knees a break in pomeroy

We met a man there who told us to camp in the city park, which we did. When we got to the park there was a young military man doing excercises in jeans and combat boots with three highschool kids. I’m fairly certain he was showing off his strength for us, but what he didn’t know is that Lizzy and I were laughing hysterically at the situation. . . At one point he asked us to tell them what type of exercises to do next.

There was this fabulous pagoda that we decided to camp in. We didn’t take note of the fact that the main light fixture in the pagoda was full of water, or that there were puddles in the pagoda, or that we couldn’t find any dry grass for Beefy to nest in, or that all the acres upon acres of grass that we’d been riding through the past eight hours had all been scratchy dead and that we were in a lush, green park.

So it was that 4:00 this morning we were all awakened from out deep slumber by a torrent of water upon then tent. Honestly my first thoughts were: “that’s funny a storm blew in that quick,” then, “how wet would are stuff actually be if we slept through it. . .”, and though I’m not proud of it, “I’ll just let Lizzy get the bikes.” Tempting as sleep was, commercial strength sprinklers in the face at 4 am prevent snoozing. We popped up and moved everything to the next covered area, and just as we we’re climbing back into the tent, another sprinkler went off. Up we got again and moved everything one more time.

Now we are in Lewiston ID, our third state. Everything is dry, Beef Is getting his prescription filled. We met a fellow cyclists who told us a horrendous story about how his body absorbed some of his foot bones and they exploded(he was explaining why he only had 1.5 feet, though we didn’t ask) I’ll spare the details, but I’ll tell you this: SICK MAN!!!

The knees are feeling much better, thanks for the prayers.

6 thoughts on “We Should Have Seen the Signs”