So, we’ve been out in the boonies for the last few days, worrying our parents sick, but now we’re back in civilization AND in a whole new state!

Let’s see where we left off… 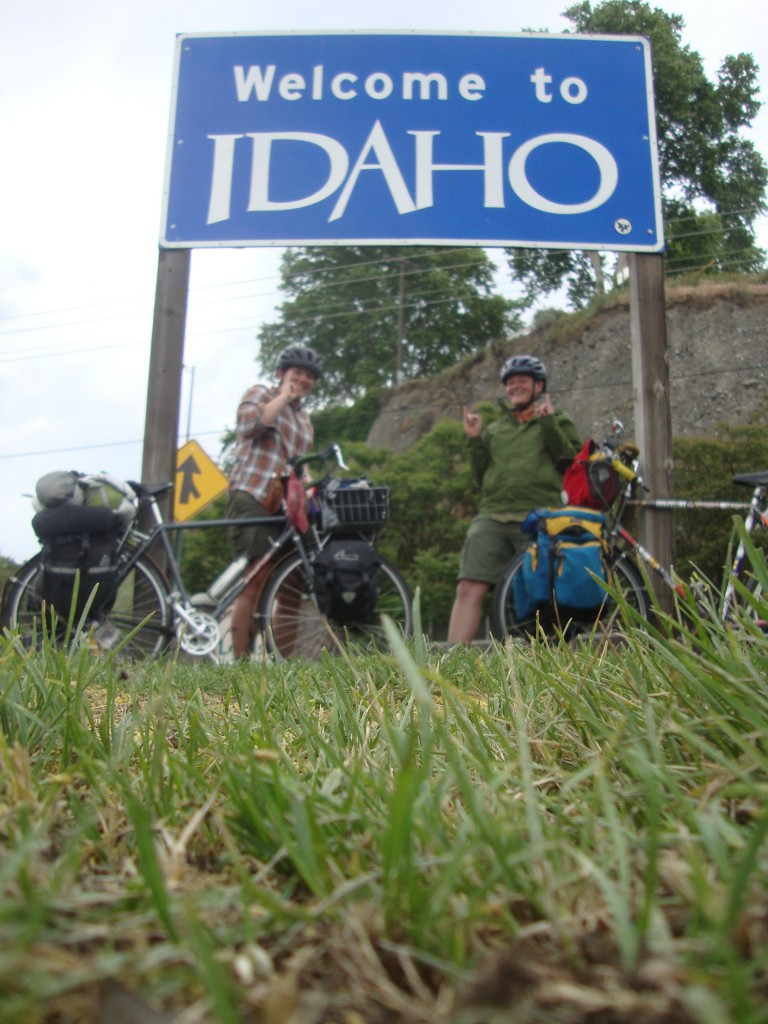 tripods are for the weak and the well-prepared

We biked up several miles of 7% grade in Lewiston, Idaho to get some drugs for Beefy. He’s had wheezy old rat man breathing for awhile now, and my vet figured we should try him on another round of antibiotics. The ride up to the vet’s office here was a true test of our love & patience for the smelly little dude. But, he sounds a bit better, so, worth it in our eyes.

After we sped back down the 7% (by the way, downhills like these are the bomb) we scooted on out of Lewiston & into the soggy wilderness for what seemed like a whole week. We camped about 30 miles out, next to a river, and at 7:30 the next morning as we climbed out of soaked tent, packed up, and mounted our cycles to roll ever on, a rancher man tending his cattle across the road commented on how tough WE were! I couldn’t believe a real life rancherman said this to us! 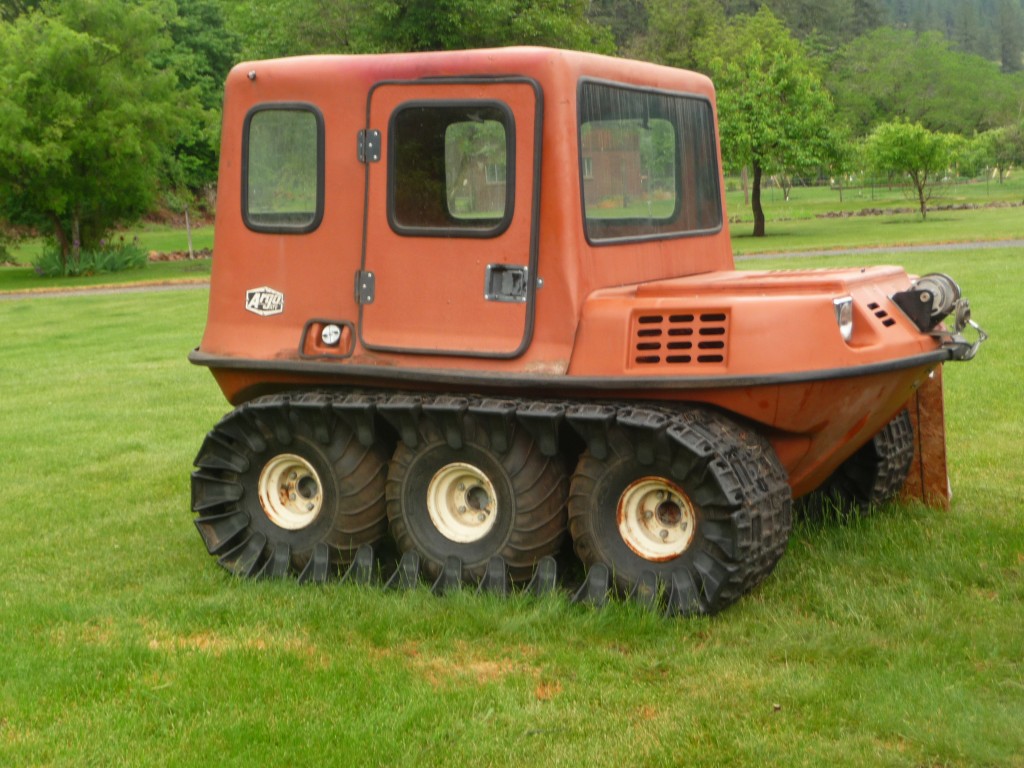 Stink’s new commuter. (this is for you Heather)

We biked on for 73 miles in the rain and eventually got to Lowell, and, tempted by the sight of greasy burgers, ate our first restaurant meal of the road. I literally had a burger with all the fixings, sans the burger aspect. Totally worth it. Thank you to our friends & family who insisted we take their monies, as we used this fund to get a good meal in.

That night, we camped in the rain again, but awoke to sunshine, in what appeared to be back home in Oregon again. We laid out all our crap to dry, did a quick trip back to town for water, did some bike maintenance, then rolled off again. 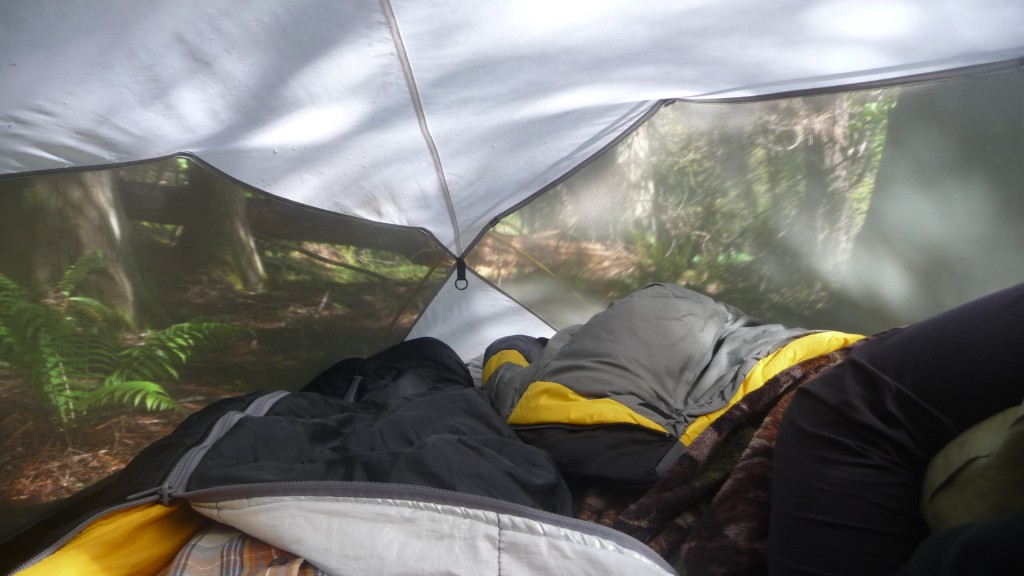 waking up with a “suite” view

We were traveling along the Clearwater & Lochsa Rivers, and got to see lots of folks riding the rapids, and even surfing (somehow!!) the waves. The road was winding, windy, and had a narrow shoulder, but we carried on. 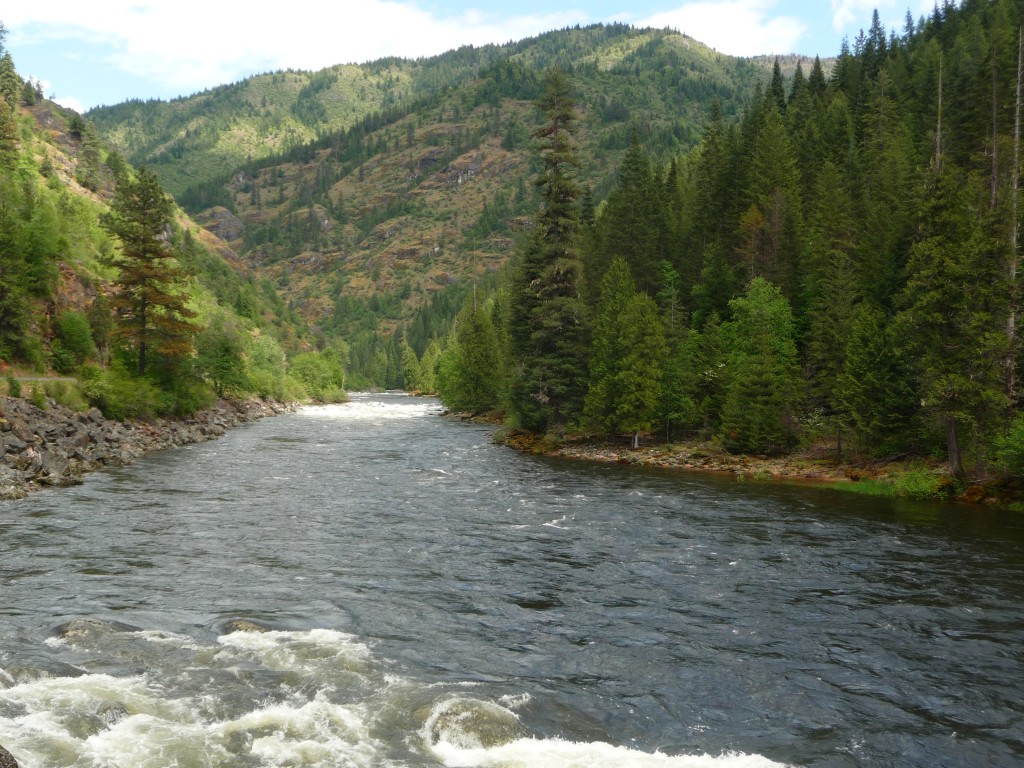 the Lochsa River being all purty & stuff. 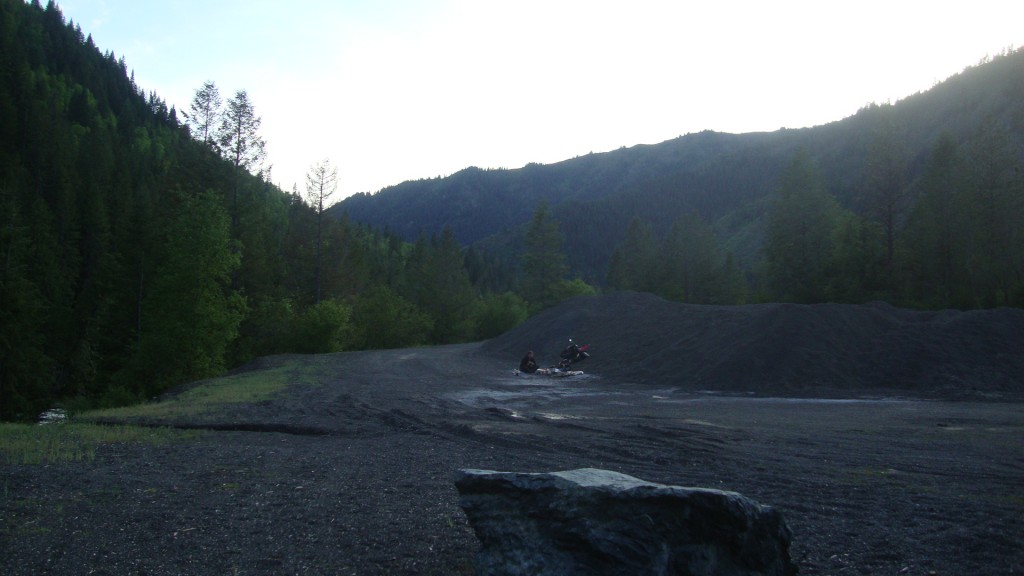 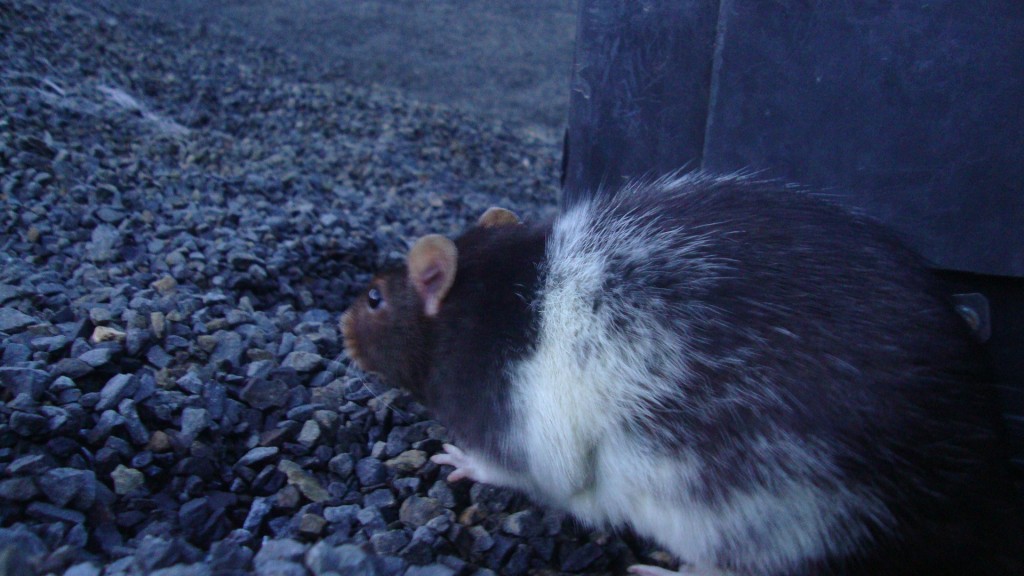 That night, we camped behind a mountain of gravel in a road maintenance station, and cooked up some schlup, endearingly called “The Dinner”. (Winco bulk dehydrated refired beans, instant mashed potatoes, quick rice, nutritional yeast, and a last minute, but very necessary addition of a carrot. Eaten over matzo crackers, with ketchup……..). Then, time for bed again, and zonked out. 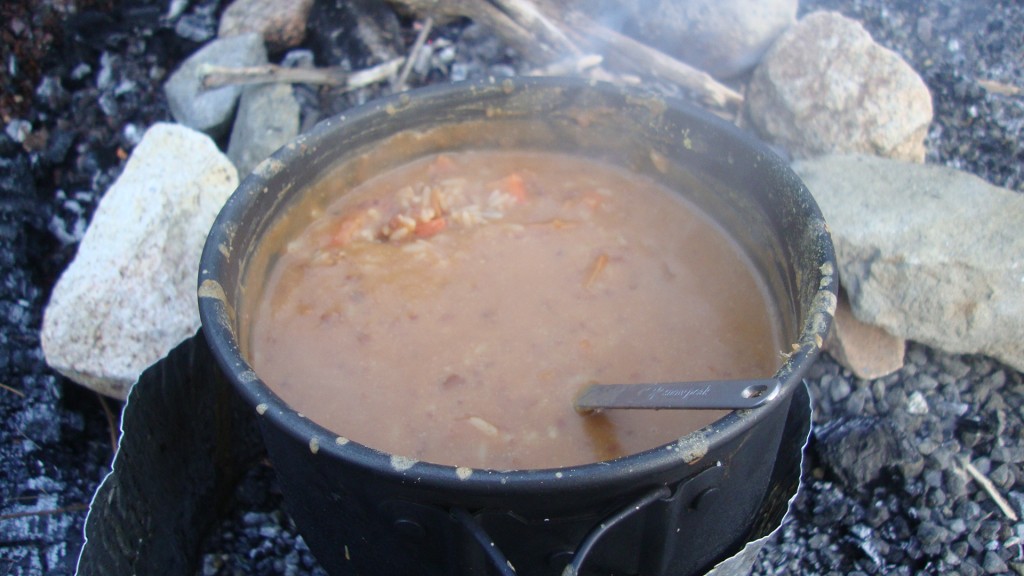 The morning was (surprise!) chill & windy again, and our monumental task of biking 34 miles, then 12 more up and over Lolo Pass, then the remainder of our daily 55, loomed large over us (literally). But, we packed up, got warned by a cop of the dangerous roads, and trudged on.

I counted miles to the lodge/gas station that we would find 12 below the pass, and when we finally arrived, some fool man was grinding & cutting his way through concrete making a complete rucus! I was ready to relax before the big climb! He was totally just doing his job, but I enjoyed having something to grump about.

We staked out a picnic table out back, feasted on all the snacks in our bags (seriously feasted), then packed up, plugged in our headphones, and rolled out. I blasted Built to Spill (of Idaho origins) in one ear, and left the other open to listen to Stink’s comical grumblings and protests against the prevailing headwinds. (“Wind! If you don’t stop, I’m gunna punch you right in the face!!” *the wind uninterestedly continues, and Stink defiantly punches the ambivalent air in front of her*)

But alas, after what felt like, and probably was, hours of slow climbing, we reached the pass! There was a ranger station up there, and we parked the bikes, excitedly guzzled free coffees (I was so happy!) and got to chat with a few different folks who stopped to stare at our tricked out mobile homes. 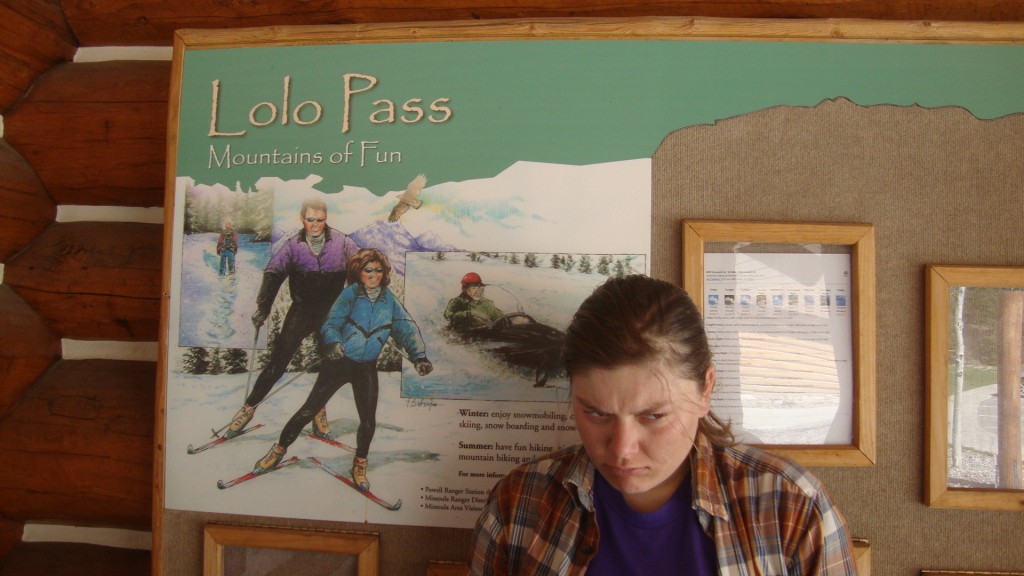 Among these, we met John, a motocyclist, who will soon been riding all the way down to the tip of South America, and a couple, David & Melinda, who were on their way to the Lolo Hot Springs. I said that if it was free and along our way, that we’d assuredly be soaking it up. We then walked off to check out the minimal (but still existent!) snow, and by the time we got back to our bikes, found a note & gift of hot spring entrance money from them! Those sneaky dogs were too nice! 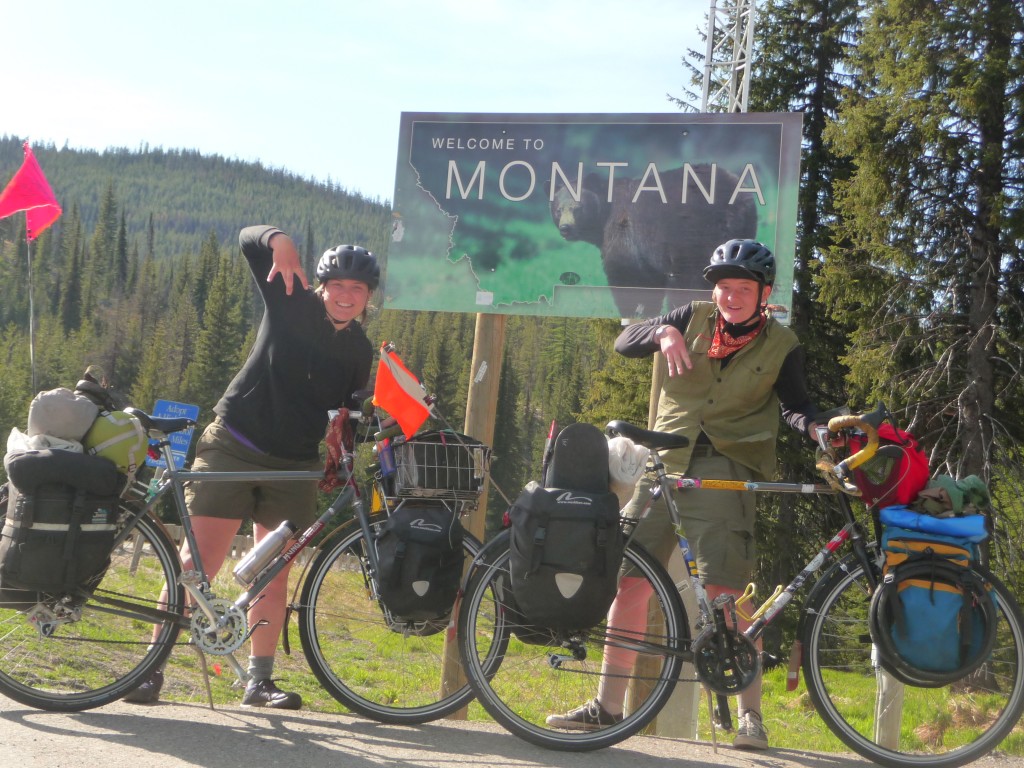 I’m pretty sure this is taken straight from a old highschool German textbox. Seriously. Check out those angles and that major 90’s-ness.

We finally rolled out, got our obligatory “new state” picture in front of the Montana sign, and speed down our well earned downhill. About 7 miles in, we reached the hot spings, and went in awe to the doors. We checked in, showered the grime off our staaanky bodies, and proceeded to soak our achey knees/bums in 105 degree waters. Niiiiice.

While there, we started chatting with this nice man Steve, from Beaverton, about his son’s extensive bicycle travels around the U.S. & Europe. His style of dumpster diving & sneaky camping jives quite nicely with our own. After a bit, Stink & I headed to the outdoor pool to cool our rapidly boiling brains (don’t worry, I made sure we drank lots of water for the duration of the soak!) and Steve came out and told us he’d like to pledge two cents per mile to the patients of Watsi, and to meet him at the restaurant next door & he’d buy dinner for us!! Woah! Generosity overload in Montana!

We finished up with another soak, rolled next door, chatted with a couple local kids about Beefy and all things rat, stepped inside the restaurant, and lo-and-behold! There was David & Melinda! Our hot spring providers! We had a great conversation with them about fibonacci numbers among other things, and then went over to join Steve & his parents at their table.

They had just finished eating, so his parents headed back to their cabin, but Steve sat & talked with us as we wolfed down a philly steak sandwich and a taco salad respectively. Then hugs & goodbyes and we left under cover of night to camp in a ditch just down the road.

Once again, morning was cold, wet (condensation wise), & windy. We walked back to the cafe for potty usage, and saw a fellow bike tourist roll past. Then we returned to our stealth spot (having a bit of trouble finding it ourselves…), packed up, and got ready to roll out, when we noticed that my kickstand had mashed in & was rubbing my back tire (quick fix) and that Stink’s rear wheel wasn’t, well… wasn’t really attached to the bike… Wonder how long we’d been traveling like that for…

Anyways, mounted up, and rolled 27 windy miles to Lolo, and got our first cell reception in days! Blew up a McDonald’s for their free wifi, and sent out some cards in the post office next door. (By “blew up” I do not mean that we literally blew up McDonald’s. This term refers to the remarkable speed and nonchalantness in which a bicycle tourist will take out every single item from their bags and have them scattered on every available surface within moments of pulling to a stop. This is also called “getting our loiter on”).

Somehow, we spent like 3 hours there, catching up with worried family, writing journal entries (that I can never seem to catch up on), and attempting to contact Missoula press for an interview so we can spread the word about Watsi. (By the way, I was quite succinctly informed that Missoula gets hundreds of tourist riding through every year and they do not print such frivolous stories in their newspaper. Sorry, that sounds sassy… I’m being a bit sassy about that.) 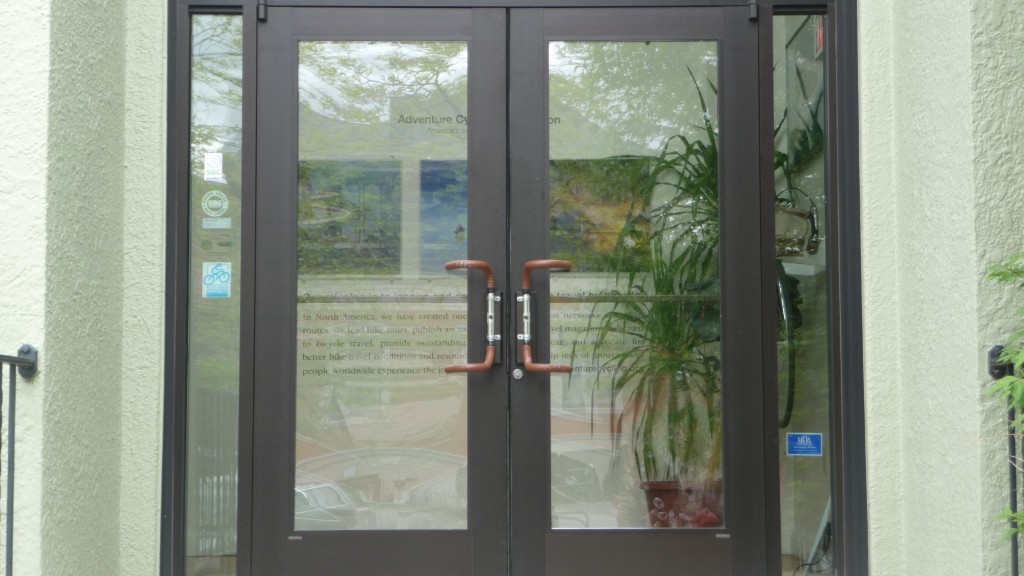 check dem handles out, yo.

We then FINALLY headed out to do the last 10 or so miles to Missoula, first to visit the Adventure Cycling headquarters (which folks had been urging us to go see) and see if the rumors were true about the free ice cream…. And they were! We were greeted at the door by displays of bikes from history that had done long treks (with their owners) and, most importantly, off up and around a corner, Stink caught a glimpse of a bike she instantly recognized as her cycling hero, Ian Hibell’s. It was actually a really beautiful moment & I thought she might cry. A man stepped forth and explained how Ian’s bike had come rest there at the headquarters (he had known Ian personally back in the days of their transcontinental touring) and gave us a personal tour of the other cycles on display throughout the building. This man, Greg Siple, has also created, and continues to create a collection of photographs and essays about the bicyclists who’ve passed through their doors since 1982. He had us write about what we were doing, and why, and the most unusual thing we were bringing along (my pet rat Beefy for me, which Greg said was a first) and then led us out back to take our portraits to join the other cyclists of history. 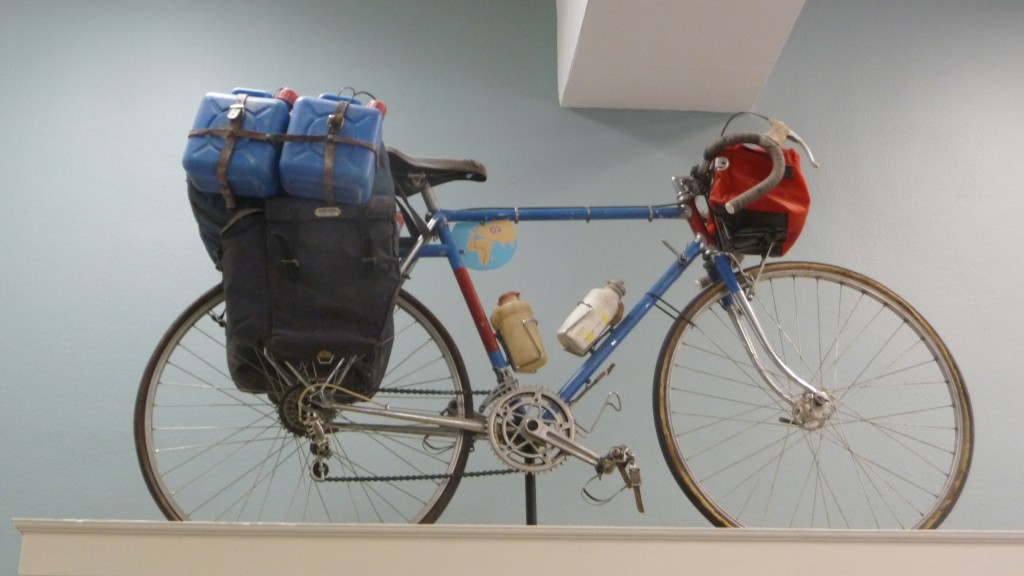 This is Ian’s bike. Stink was in love. Straight up.

After we finished up, Stink gave a call to her pastor’s wife’s parents (the Babons), who live here in Missoula, and we started heading their way. We arrived to friendly faces and a welcome home, with dinner, showers, laundry, beds, and best of all, really excellent company. Cindy & Jack have a great dynamic, love their kids and grandchildren, and have a loveable old dog named Jäger, who for unknown reasons, refuses to walk on hard floors, unless he has at least one foot on carpeting at all times. This baffles me, and I love it.

But okay, this is a very long winded post (wherein I do actually talk about the wind quite a few times) and I’m up at one in the morning writing it, so I’m now drawing it to a close. We’ll add pictures & post it in the morning, but for now, much love from Stink, Beef, and I, and to all a goodnight!

P.S. We’ve renamed Meriwether Lewis & William Clark to Billy Clark and Mary-Lou. Please enjoy, and use responsibly, by which I mean, anytime you think/read/see the names Lewis & Clark ever again.