Here we are, a week into tour, gettin’ freaky already: 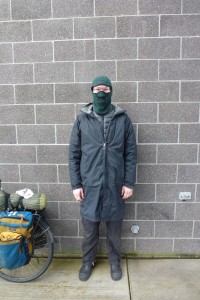 Tim, looking his most approachable. 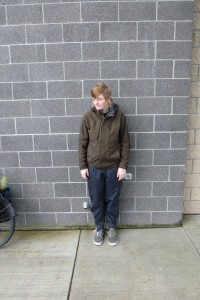 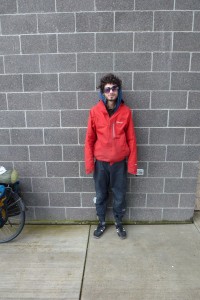 Okay, so Lizzy here taking over for a bit more story telling:

So we wake up in this field out behind a big wood pile by the village market. It’s raining. We snooze the alarm. It keeps raining. Why does it keep raining? Eventually we do have to drag ourselves out of the tent and start packing up our gear. As usual, once you climb out of a tent, you realize that the sound of the rain isn’t nearly as bad as the amount of rain, but still, it’s raining.

Once we get all loaded up, we made sure to loiter a bit under the overhang at the Langlois Market. Kyle made one rule for the day: Please don’t continue to mindlessly singing the Langlois song Timmy had made up the day before. (It would start pouring out of our mouths without a second thought. I’m pretty sure we sang it in our sleep all night and kept Kyle up).

With our three rules of the road (first two being, BE SAFE & HAVE FUN) established, we got going.

It was windy. Very unhelpfully directed windy. We were crawling.

Eventually we got to a construction zone and the flagger told us we’d picked the wrong week. I knew the road ahead would be cliffsides overlooking the coast, but did not know that emptied trucks had often blown over from wind there. Great.

Oh well, only thing to do was to get going. We did our twelve miles to Port Orford in roughly two and a half hours, and immediately stopped at the laundromat. Soaked and tired, we soaked our tired clothes then gave them a nice tumble dry. Our next plan was to get to the library just five blocks away and see what we were up against.

The five blocks were arduous. The wind would have us turned completely around and rolling the wrong way out of town if it could. As it was, it was very difficult to keep your front wheel facing forward as you crept along.

I stopped at the Ray’s dumpster just on the way and found treasures as always (this dumpster has never failed me). Carrots, squash, bell peppers, jalapenos! chips (funnily enough labeled “Gluten Free and Suitable for Vegans”, kettle corn, and grape juice. A nice haul. 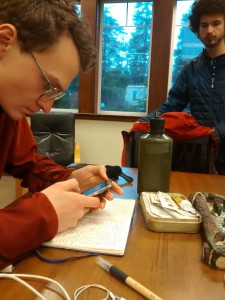 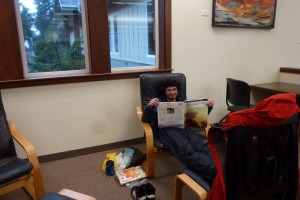 We EVENTUALLY reached the library, and Timmy found, just as we suspected, a severe winds warning in effect. So, naturally we hunkered down for a long loiter. He researched a bit to see if we could find a host in town, even resorting to Couch Surfer for this stint. We had planned to at least be able to go six more miles to Humbug State Park, but even that was deemed too dangerous. (We even seriously looked into busing out of the region!)

Timmy went to wash out a dirtied pot in the bathroom when he got a text from a potential host, and promptly deleted it and any trace of the phone number. A funny accident, but eventually was able to trace the phone number using his cell phone record, and  a hopeful text was sent.

A new friend was willing to host us! We finished closing out the library, as we are apt to do, and re-hit the Ray’s dumpster, procuring more veggies to make a bountiful feast. We had four more blocks (Port Orford is a small town) to go, this time with the wind at our backs and the promise of a nice night indoors thrusting us forward. 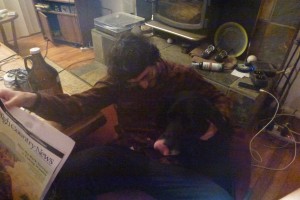 Kyle, and Borris, the horse. or dog.

We arrived to greetings from Russel, his giant dog Borris, also Bob and their friend Tyler (Bob and Tyler we right in the middle of a N64 Mario Kart battle). They were quite welcoming, and soon enough we had glasses of homebrewed IPA (I think the best I’ve ever had!) and bowls of dumpster popcorn, and were settling down to a nice game of Carcasonne.

We cooked dinner and shared our good fortunes and stories and listened to music. Bob and Russel are both observers on fishing boats in the region and are quite active outdoorsmen. Their home was quite a haven from the winds and we were quite grateful. Bob offered to give us a lift to Brookings in the morning, as he was heading there for work anyways, and after a moment of private deliberation, we opted in, to get out of the crazy weather, and get back on schedule.

In the morning we loaded up our bikes, even cramming mine into the back of Bob’s car, for a nice, scenic, and dry, tour down the coast. Bob knew all the rivers and streams and kept us entertained with his local knowledge.

When we got into Brookings, he refused an offer to let us get his morning tea, and headed out on his way after hugs were given round.

Going in a car was like literal time travel. 56 miles in an hour. It was good.

We loaded our gear back on the bikes and rolled out to the post office for  a quick bit of silly loitering (Hey! We could take our time! We’d already traveled 56 miles that day!), then back on the road, only to stop again in a few miles to get snacks from a Groc Out (and half a bag of little bell peppers, a stalk of broccoli, and a bag of kale from the dumpster). We had to spend a good while there, being silly and snacking and loitering again. 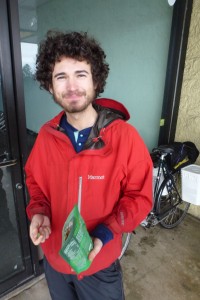 how does this boy still look so fresh?

EVENTUALLY, we really did get on the road, heading for the Cal-Or border, and the casino which lies just past it, offering free drinks to those who stop in. After losing a collective two dollars and fifty cents, we went back outside and did even more silly loitering. 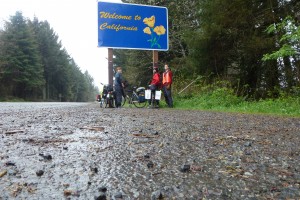 A woman came by and her companion gave her a nudge in our direction and she looked up and asked if we were cyclists… Well, yes? Turns out she was our Warm Showers for Crescent City (2/2 for finding our hosts at casinos!).  She was taking advantage of the free drinks as well, and said she’d see us in a bit down the road.

Our next stretch of miles was easy and breezy with high hopes for what was to come (Katie’s Warm Showers came highly recommended). Also, we saw a huge pile of hard boiled eggs on the side of the road. Good day.

NO IMAGE OF THE EGGS I GUESS. SORRY.

We got into town and stopped to check our phones to see where a bike shop was to get some chain lube, and a new rear light for Timmy (his seemed to not really like being completely waterlogged for a week on end) but while we were occupied, a grungy Santa Claus looking man, smoking a small cigar, walked his bike towards us. Cyclist to cyclist, I asked him if there was a shop in town, and he set down his bike, gathered his breath, and we all prepared for a long conversation.

His name was Kenneth Wayne Winters. He’d had a stroke in January. He said, “Boy, you’re a big woman, aren’t you?” His RV home had been stolen two years ago but he secretly owned a ‘top of the line’ BMW, bought for a song at $1,500. But don’t talk to loudly about that or he’ll have to kill you. Just kidding, he says, he loves people too much to kill them. What a relief. But anyways, the bike shop is just down the road that way, and the boys better watch out because he might come steal me. Good looking woman.

I was laughing my ass off as we rolled away. What a character. 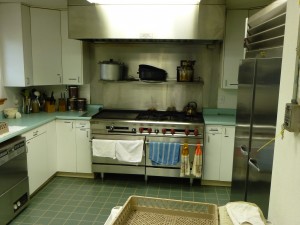 Anyways, we headed right for St. Paul’s where Katie was having us for the night. She gave us the full rundown of the the industrial kitchen, bathrooms and showers, and huge open “bedroom” with a couple couches to boot. She headed out and we made ourselves quite comfortable and got a good snack on before suiting up again and going back out into the rain.

We hit the bike shop, then the library for a planning/blogging/journaling sesh, and also saw the longest most awkwardly shaped bathrooms in existence. After we closed that out, we waded back out into the growing deeper by the moment puddles, and headed to Groc Out for, you guessed it, more snacks, and also goods to make “real tacos” for dinner (apparently heating a can of beans on the road doesn’t make for the best tacos…), after that, the Home Depot for some needed hardware, and finally FINALLY home again to St. Paul’s to be dry and cozy. 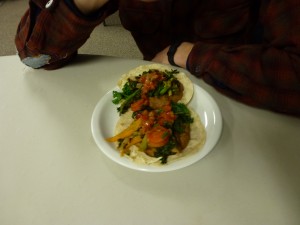 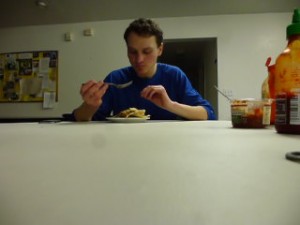 REAL good that is.

We cooked up a fine meal, laid out all our sodden gear in front of the many cadet heaters availiable, gorged ourselves, and then topped it off with vege ice creams, and before long, dropped off to sleep, one by one, coziest little bears you ever did see.

Anyways, that was that. We’re a bit behond on the story telling, but Timmy will have an update for you in a couple days.

p.s. maybe not a lot of photos because rain, okay? okay.

4 thoughts on “SUITABLE FOR VEGANS”