After a night of full rest at Katie’s church we woke up to the sound of the same rain that we’d fallen asleep to.  Enjoying the comforts of the church community room, Kyle made oatmeal and I enjoyed some chocolate yogurt (yes it was weird). Lizzy some grocery outlet cereal.  We packed up our stuff and by the time we were ready to leave the rain seemed to have stopped or at least lightened up.

As we rolled out of Crescent City we noticed it was much warmer than we’d experienced during the fist few days of our tour.  The warmer weather and cloudiness that describes the Northern California area so well made our climb into the Redwoods a hot one.  We ascended to the top of the 1000 or so foot hill that Katie had told us about, with a few stops along the way. 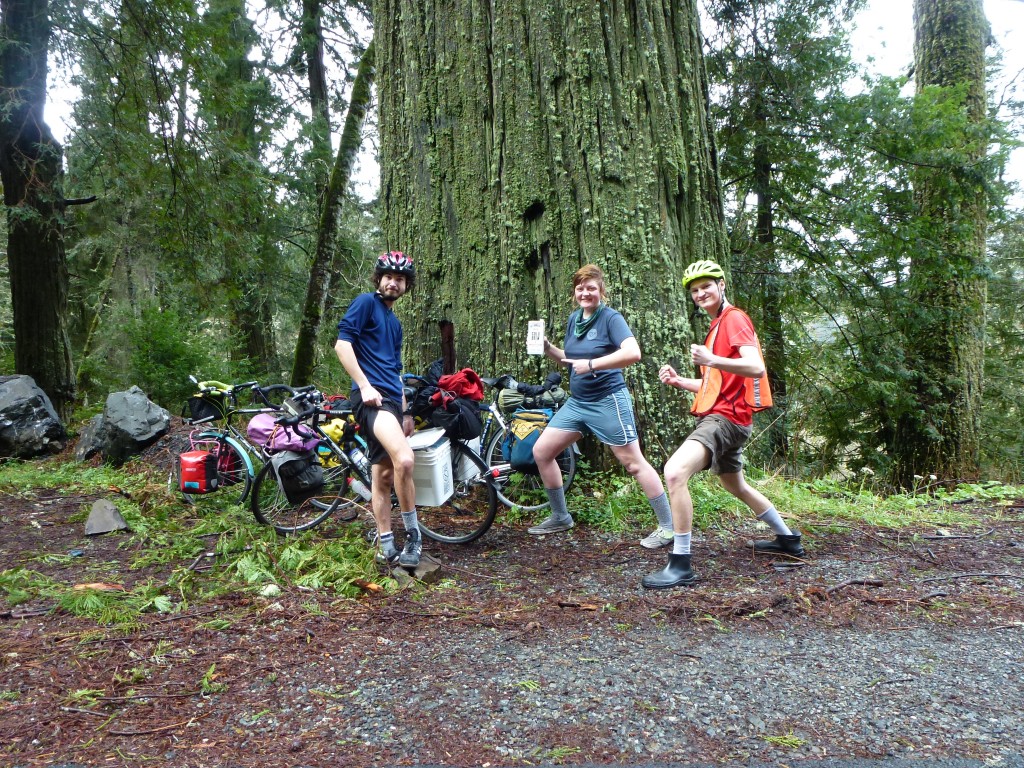 The descent down our first hill was pretty breezy and I think we were all pretty excited when we saw “7% grade next 2 miles signs.”  The the bottom of our first climb we stopped to see the coastline we’d covered as well as a little boy that fell in the ocean.  We were glad he didn’t get swept out, walking back to hi family’s RV with his dad he was bawling and yelling “I hate water.” Poor little guy.  There was various construction in the area too, and after waiting, one flagger asked us if we wanted to go first or last. Of course we chose first and she warned, ” okay but you’ll be sorry…  An interesting warning but nothing bad has happened just yet! 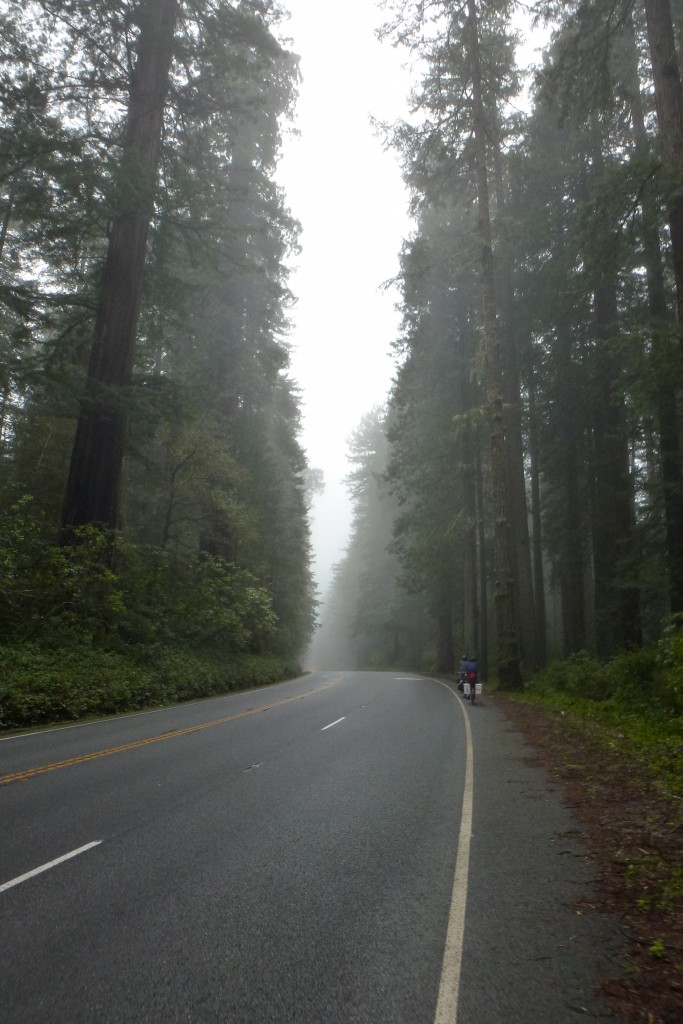 We began climbing again and eventually got to the infamous (or just famous) Paul Bunyan and Babe.  This required photo taking, at least according to a father who told his son to take pictures of us.  Inside we were offered fudge but just came out of the store with some postcards and stamps. 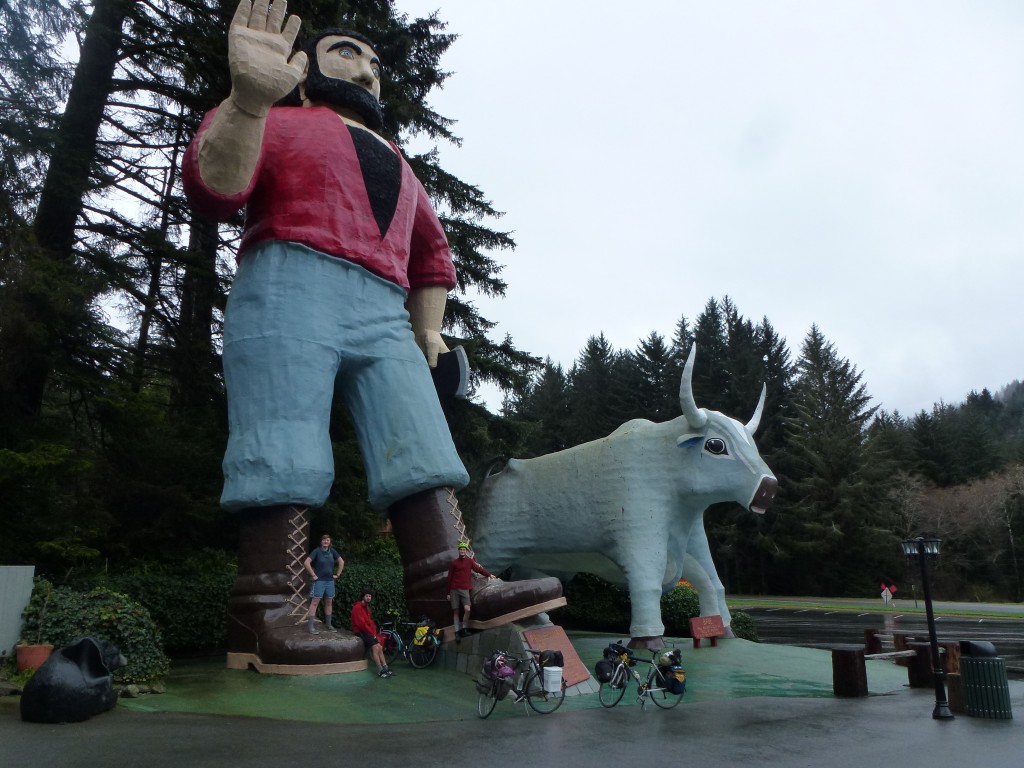 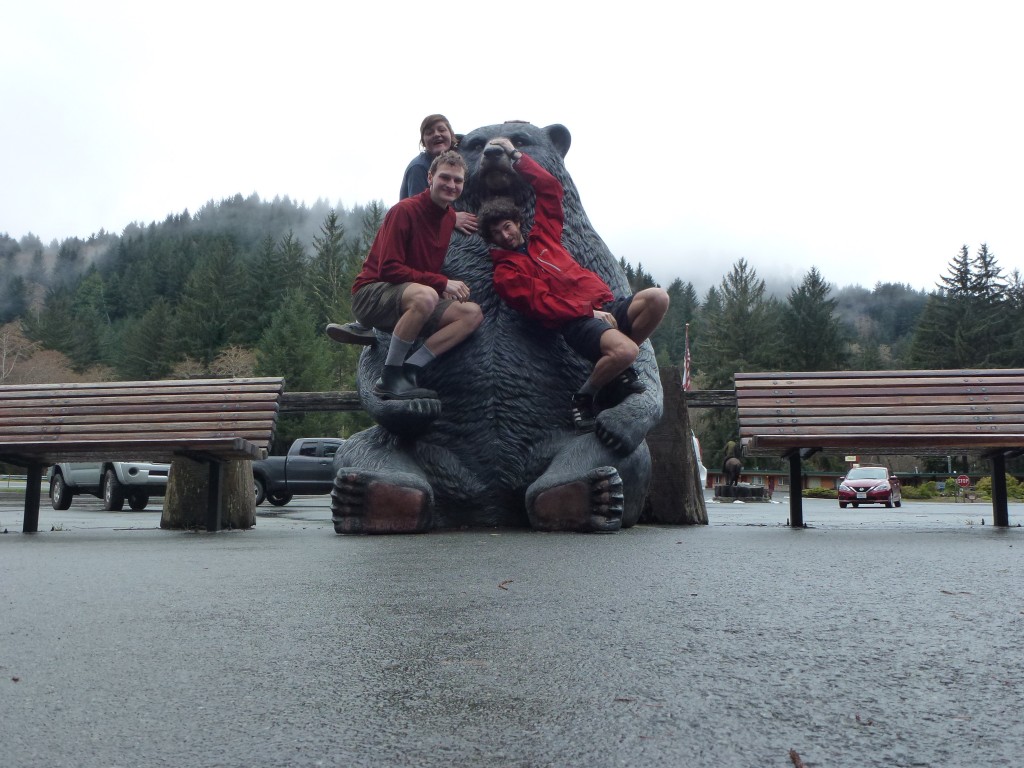 Next turn was Newton B. Drury Scenic Parkway, a 10-mile-or-so road that goes west and parallels the 101, without the major elevation that’s gained over the 5-mile-or-so climb.  Lizzy had once before not known about this scenic byway when riding north on 101.  To her and her legs’ surprise she had to climb up to 1500′; the scenic byway tops out around 500′.  Our time on Newton B. Drury may well turn out to be our favorite part of the trip.  Not only because of the magnificent redwoods, colossal in scale, but because the complete lack of traffic on the road.  Normally the scenic parkway is open to cars and RVs and tour buses, but because of some winter road damage it was closed to all traffic (but bikes fit under gates!).  On Newton B we climbed a small hill and then cruised generally downhill.  Lizzy showed us a tree in which she slept on a previous tour and we had the entire road to ourselves.   Ten miles of car freeness was  a very special way to experience the redwoods.

I’d (me Timmy) been camping here previously before and therefore wanted to show Lizzy and Kyle a particularly large-trunked tree.  So we stopped for shortly near the campground and filled water.  The next leg of our trip was through some floodplains and less magnificent scenery, although still rather magnificent…  We rode through Orick, a small town with an RV park with a sign warning that, “Tenants previously evicted will be arrested upon reentering premises.”  The birds were also rather intimidating- as if they’d grown up in a hard town or something. Tough bird lyfe. 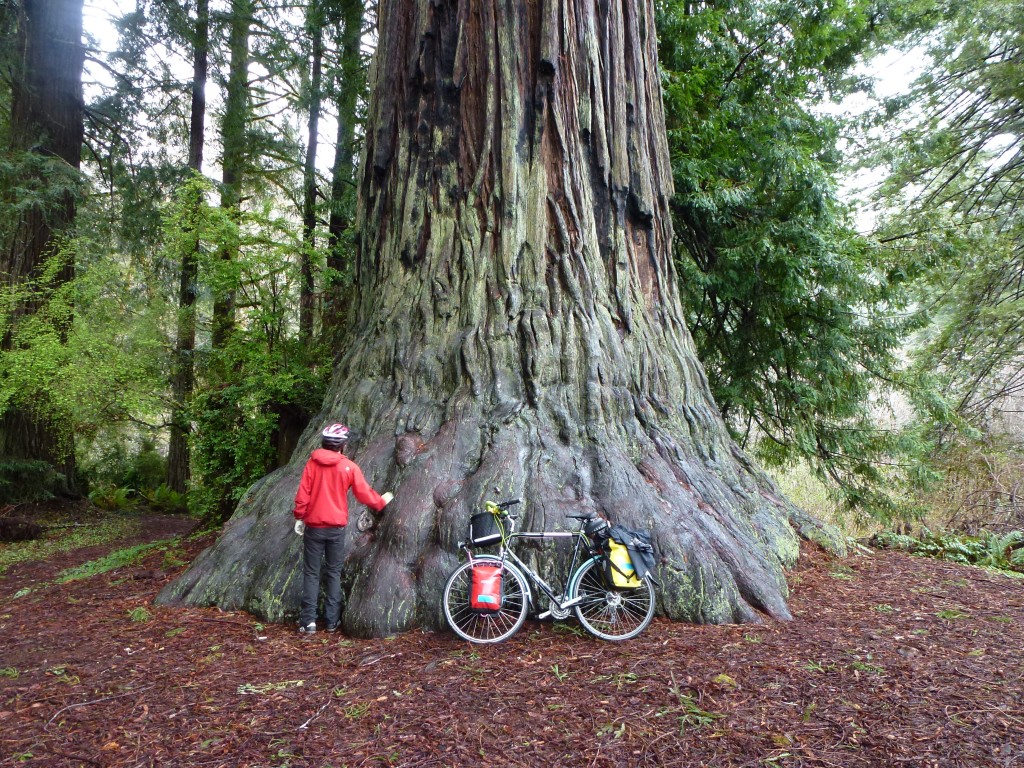 Our destination this night was Big Lagoon county park, where we arrived after a few more miles of rolling hills and nice weather (finally!).  Here Lizzy’s friend Linsday would meet us for a night of outdoor camping fun.  It was her birthday (On the 9th of march!) and she made the drive from Portland to hang out with us.  Team Dynamix pulled off the 101 onto a rough road and arrived at this park within a mile or so.  We set up our tent, checked out the campground, and waited for Lizzy’s friend to arrive. 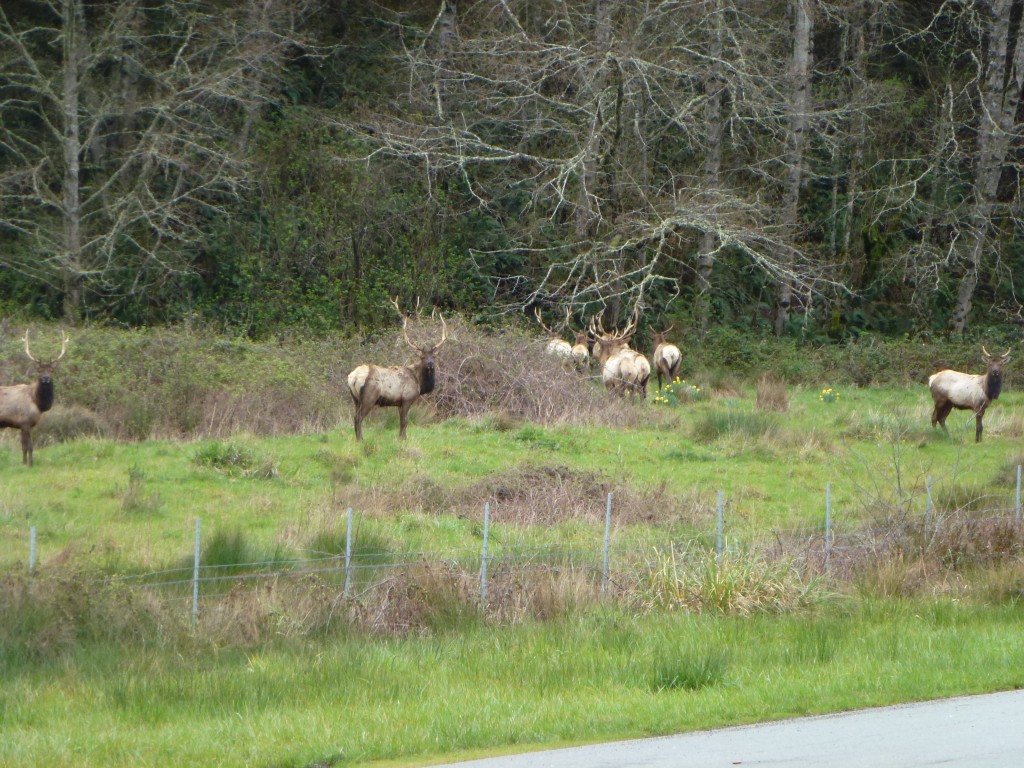 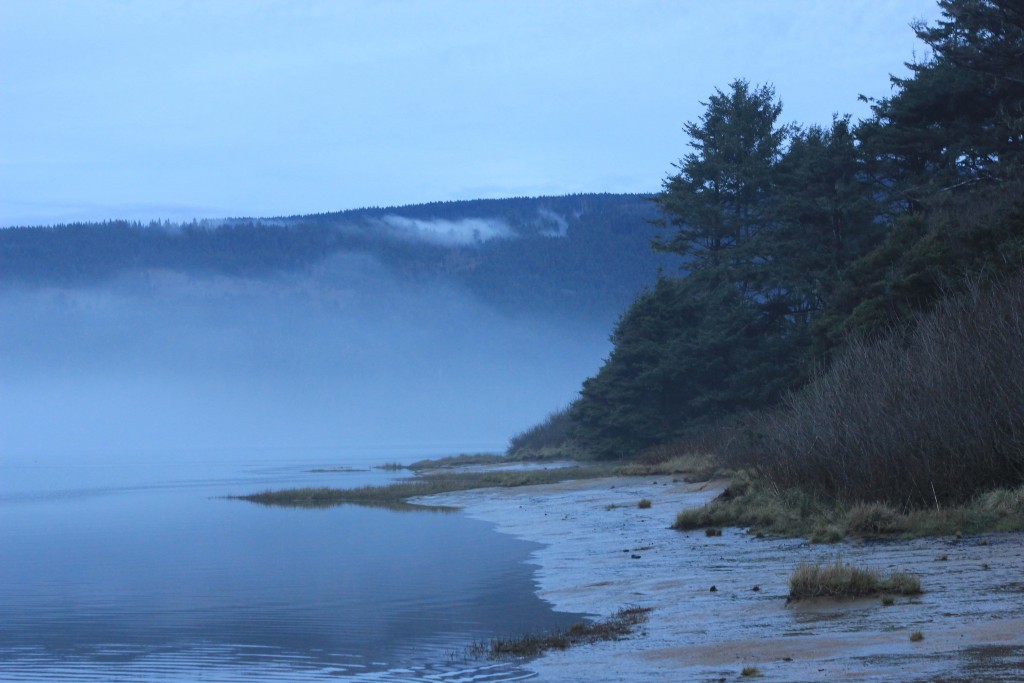 Coastline near our campground

Sure enough, up pulled the white Prius we’d been waiting for. Sometime or another Lizzy presented her birthday present and Kyle and I opened a bottle of the real party starter:  Martinelli’s Sparkling Apple Cider.  We had beans and kale taco leftovers and left the dinner tarp with full stomachs.  Desert consisted of Chik-O-Sticks and Dots.  It was a pretty killer birthday party.  It’d been a full day- about 56 miles- which is no amazing feat but longer than we’d done in our days with cold rain and strong headwinds. 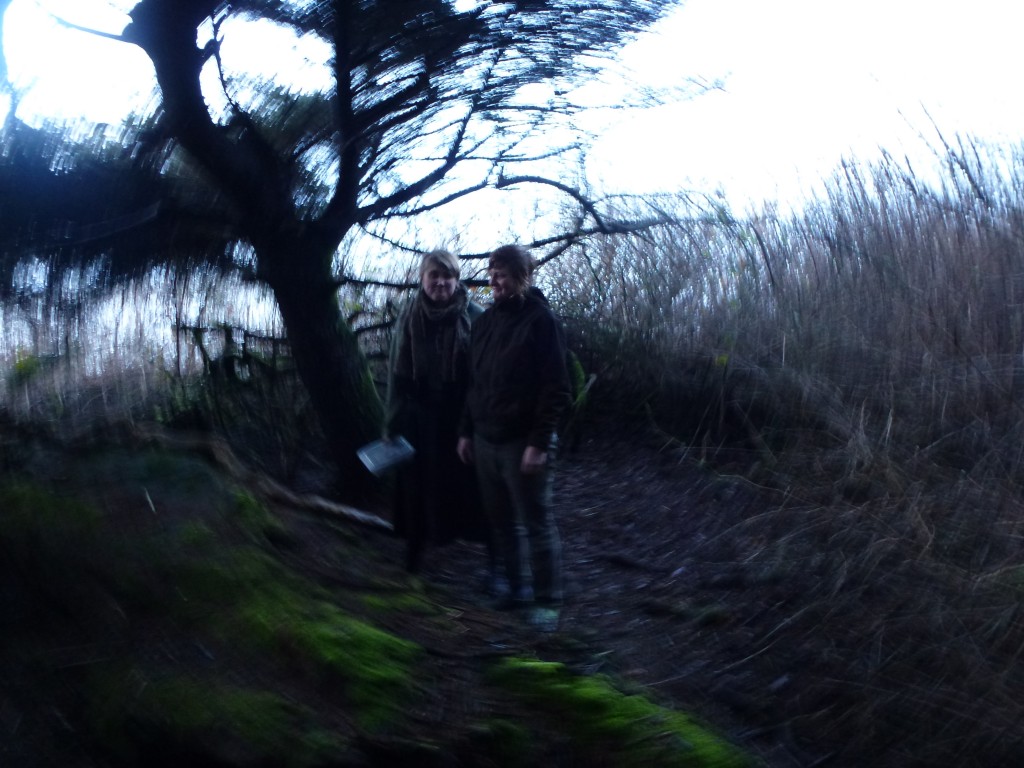 We slept in the next morning; we didn’t plan to go far, only to Eureka- the day before we’d gone a bit few more miles than planned,and Kyle had a friend in Eureka that we planned to stay with.  Before leaving, Kyle and I ended up at the beach and enjoyed watching the powerful waves.  The beach was sandy but steep and the campground was protected from the waves by a spit that extended north and a lagoon that had formed behind it.  What beautiful landscape to wake up to.  Kyle and I laughed at the fact that we could remember few times on the Oregon coast when the wind was so light and the air so warm- March in Northern California.

We found Lindsay and Luzzy when we came back to camp and after a breakfast of Chik-O-Stick and other snacks we cleaned up camp and got ready to go.  Kyle and I practiced knife throwing (I got it to stick!) into a nearby tree and we said farewell to Lindsay.

If I could only blabber about one thing today (it’s the 10th) it would be the weather. 60 and sunny baby-like heaven.  The funny thing is that we are biking in t-shirts and short shorts, and we’re rather warm.  We left the campground and began up a hill on the 101.  Looking ahead we saw coastline, neat trash on the side of the road and many fast moving cars…  We stopped at various vista points and a rest stop to let Lizzy change too.  The 101 here is  more freeway-like than in Oregon, with faster speeds and multiple lanes and exit signs that remind you of the interstates. 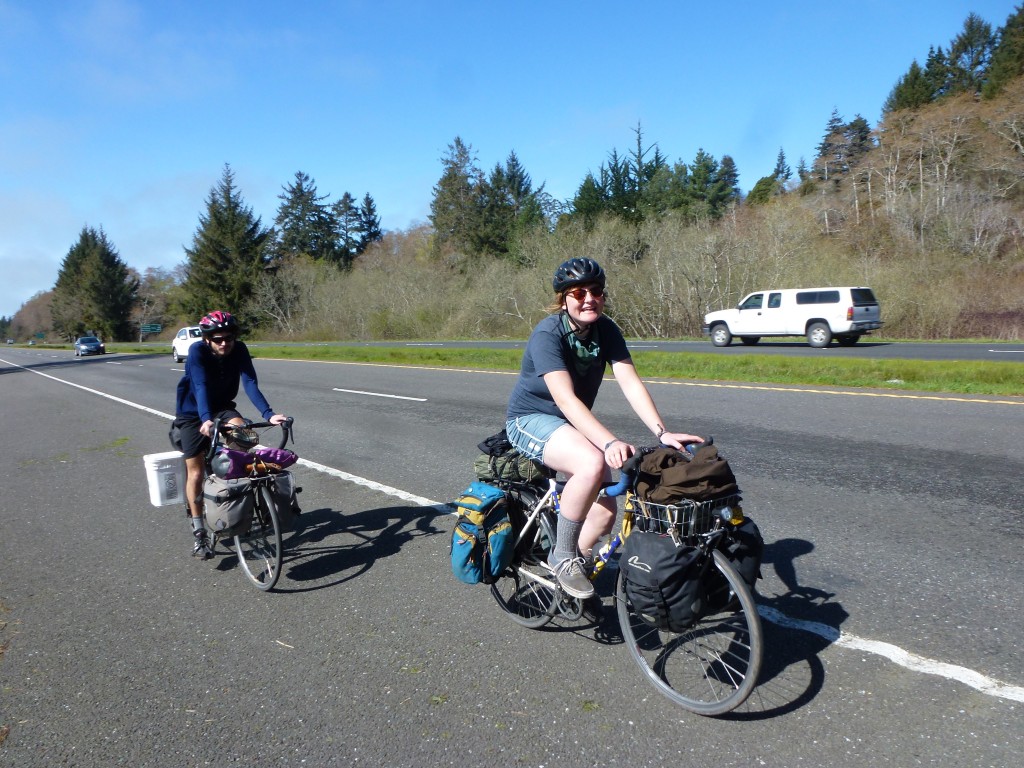 Lizzy and Kyle are biking real fast and smiling in this photo.

We stopped at the library in Arcata, a medium sized coastal college town with a good food co-op that had delicious rolls, turkey salad (Kyle) and samosas.  Here we all used the computers to catch up on some blogging (for the fans) and to plan our route a little more.  At one point we were approached by the librarian and asked if we’d been using the computer for more than an hour.  I thought the librarian was nice enough but Lizzy and I couldn’t help but laugh when another patron using a computer between us whispered to us that “she’s kind of a butt isn’t she?” 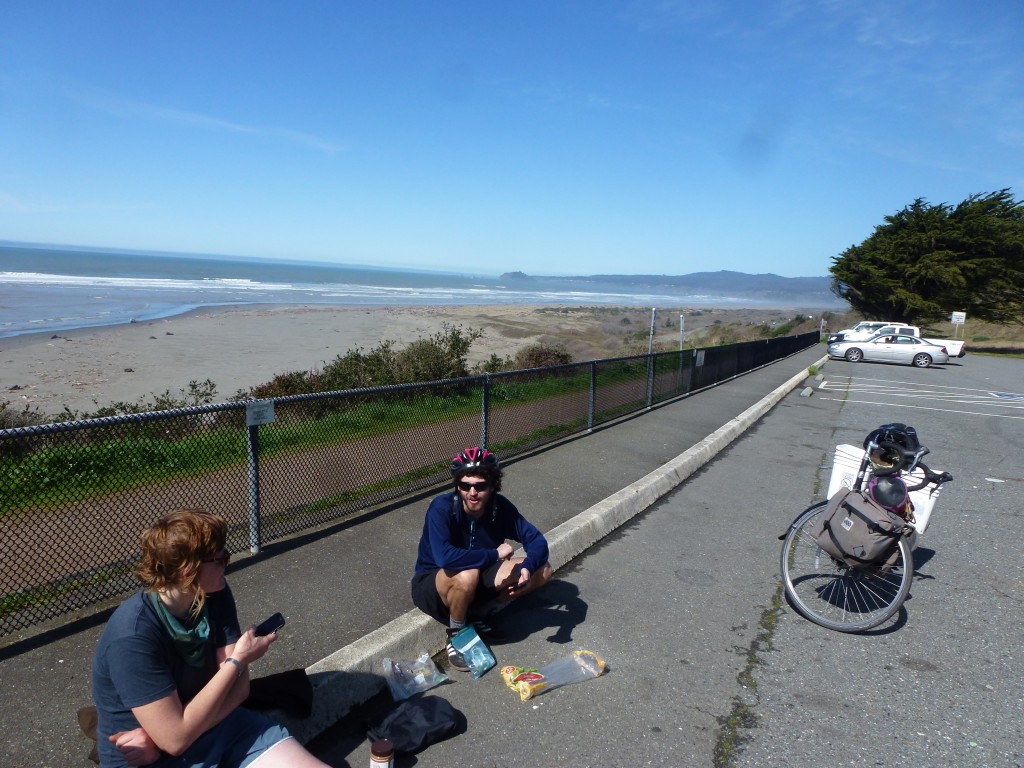 We talked to several folks in Arcata, and were told of a non-101 route to Eureka where we’d spend the night.  Twice.  People love to give directions.  We rode to Eureka on a back road as the sun neared the horizon and the moon rose above.  Myrtle road was a great way to end my birthday ride, and before we knew it we arrived at the house of Kyle’s buddies Matt and Monica.  Our hosts for the night were welcoming and had much to offer; their generosity was uplifting.  We sat for a short while enjoying a chubby dog named Napoleon and another, more human, Yuma.

I’d been set on Thai food all day, so we headed to a Thai restaurant that did not disappoint.  The aroma as we opened the restaurant door was more than enticing, and that was after three stinky folks walked in.  Matt and Monica also joined us for dinner so we had the opportunity to hear entertaining stories of river rafting clients, as Kyle and Matt met working as river guides.  After dinner we headed to a cider brewery, where we tasted several and were impressed by the quality.  We often wonder if the consumables entering in our body are actually delicious (beans, more beans) or if it’s an illusion that results from the long days of cycling.  I choose to believe that we’re darn good cooks, and that there’s no better food in the world than the beans that Kyle dehydrated before our trip.

Back at Matt and Monica’s we cleaned up, started some laundry, and called it a night.  I think we all were treated to a good night’s rest, perhaps dreaming about the fresh-non-gas-station coffee we’d enjoy in the morning.  Or maybe about how goofy of a pup Napoleon was; we should have gotten a picture of that guy…

I ought to sign off here, but Lizzy, Kyle, and I hope to post more soon as we are a few days behind!  Things are really looking up- I think this story might have a sunny ending! There’s only one way to find out… 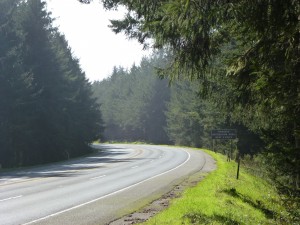 2 thoughts on “Many Birthdays, Especially Counting the Trees’”