It was a major accomplishment to reach San Francisco and meet with the Watsi folks, and a major pleasure to spend an evening chatting with Tim, our last minute San Fran host.  We awoke fully rested the next day and with a view of San Francisco lit by the morning sun.  Lizzy and I made a pot full of oatmeal that we guzzled down and took our time leaving our host’s.  He headed off to work but was kind enough to let us hang out as long as we needed. 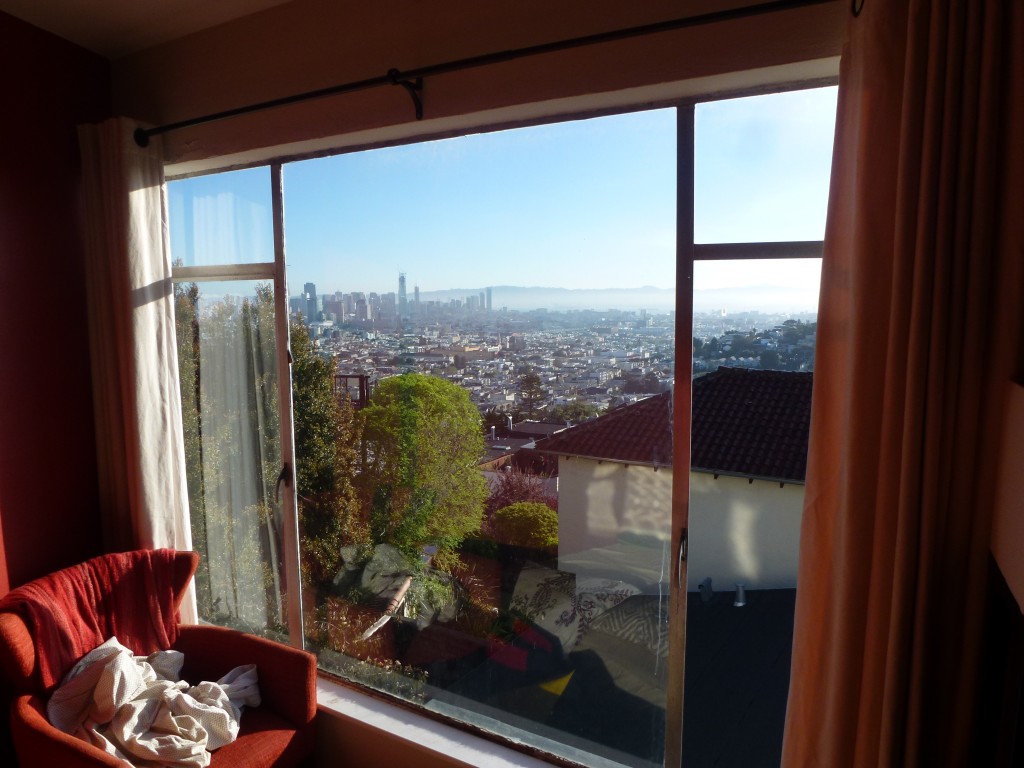 Like most days we had non-mileage-related goals: They included visiting a Trader Joe’s, and attempting to catch up blogging at a library in Half Moon Bay.  We left Tim’s and coasted down the hill that just the night before foreshadowed his kindness and the comfortable futon we slept like babies on.  We planned to go to Pescadero, which hosted some state beaches that may work well for sneaky-camping.  We headed SE and made our way through some hilly suburbia that made me hotter than any other time on the trip; the black top and the persistent hills we climbed radiated the open sky’s rays and the reliable housing blocked any breeze. It was hot. 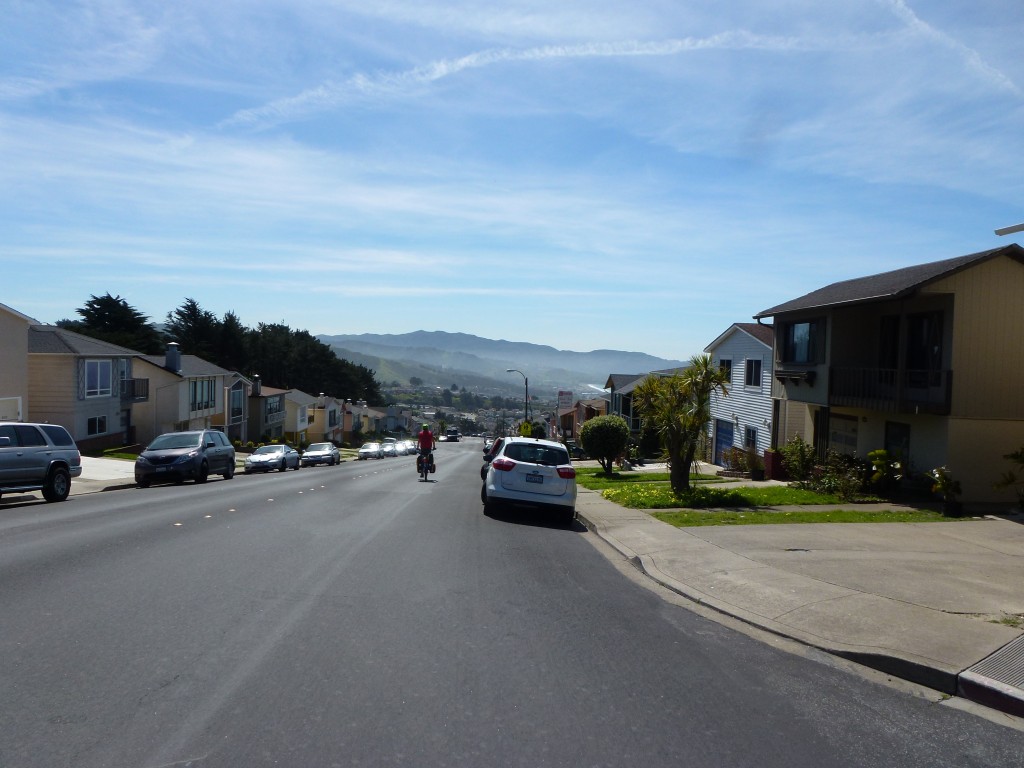 We made it to Trader Joe’s and reloaded our snack sacks.  We talked to some police officers who were very enthusiastically interested in our trip.  One kept saying in astonishment, “Wow! So you’re really doing it.”  I’d say he was rather impressed.  The sunnier conditions have been requiring sunscreen, but all we had was the most thick cream you can imagine.  Like toothpaste but perhaps less sticky and more chalky… We’d had enough.  I bought some spray sunscreen and things have been a little better ever since.  This might not seem important, but I’m sharing it because I think this is the point where we ceased to hope for clouds over sun, simply so that we wouldn’t have to put on sun cream. 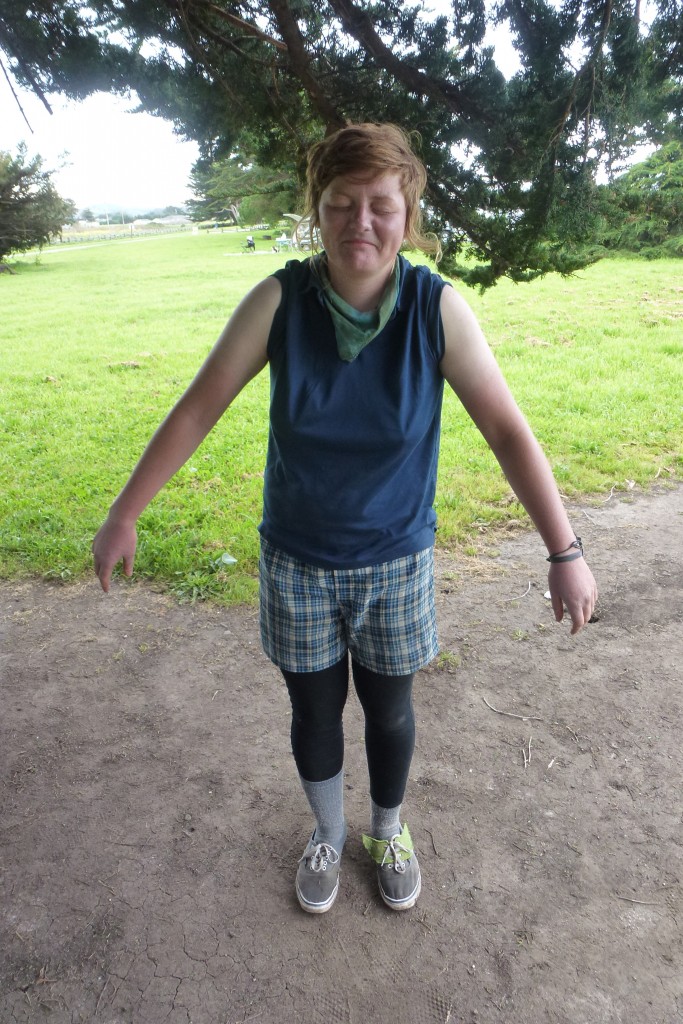 We cruised on down the coast with the challenge of navigating.  Some areas where we’d planned to take the 1 didn’t allow bicycles, but we are experienced bicyclists so with the help of google maps telling us where to ride our bikes… we suceeded.  A little ways south of TJ’s we were about to begin a climb when we saw… to our complete and utter amazement… Something we still have a hard time believing.

Anyway we did the usual there and ended up chatting with a couple older cyclists who were enjoying a nice post-ride-beer at the pub next to Groc Out.  They warned not to take the tunnel ahead, and to be very careful going up the next hill- maybe even to “walk our bikes…”  I think people forget to consider that on our second week of our trip (especially after doing the 101 in Oregon) that we’ve experienced some narrow roads in inclement weather- surely before walking our bikes we’d have to see it for ourselves.  The bikers were friendly, funny, and interested, hopefully ya’ll are reading this!

Unsure of what we’d find ahead, we rode up the hill whose conquering had been delayed.  We found the road to be narrow but nothing we hadn’t seen before, and eventually came to the tunnel.  Our options were to take the tunnel on the 1, or to take a very windy and hilly side-route.  Being rather safety-oriented, I weighed the options in my head; the tunnel seemed like a really bad idea to the cyclists we’d just talked to- Google biking also recommended an alternate route.  The right decision seemed obvious, so we continued biking to the daunting tunnel’s mouth. 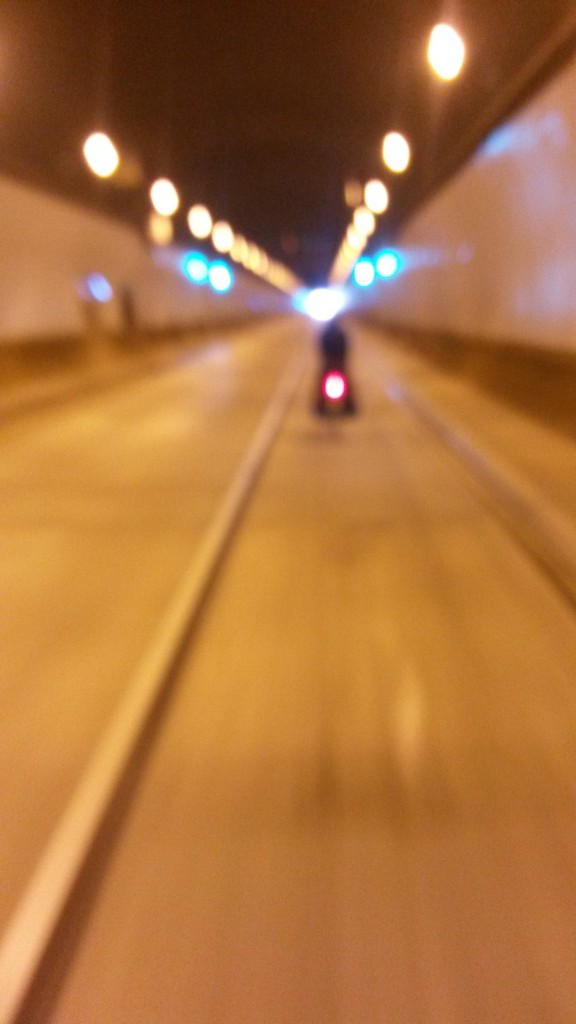 As it turned out, the tunnel had some very special qualities; it boasted a very wide shoulder, was lit well, and was all downhill- sure enough our backwards reasoning had helped us make another good decision. 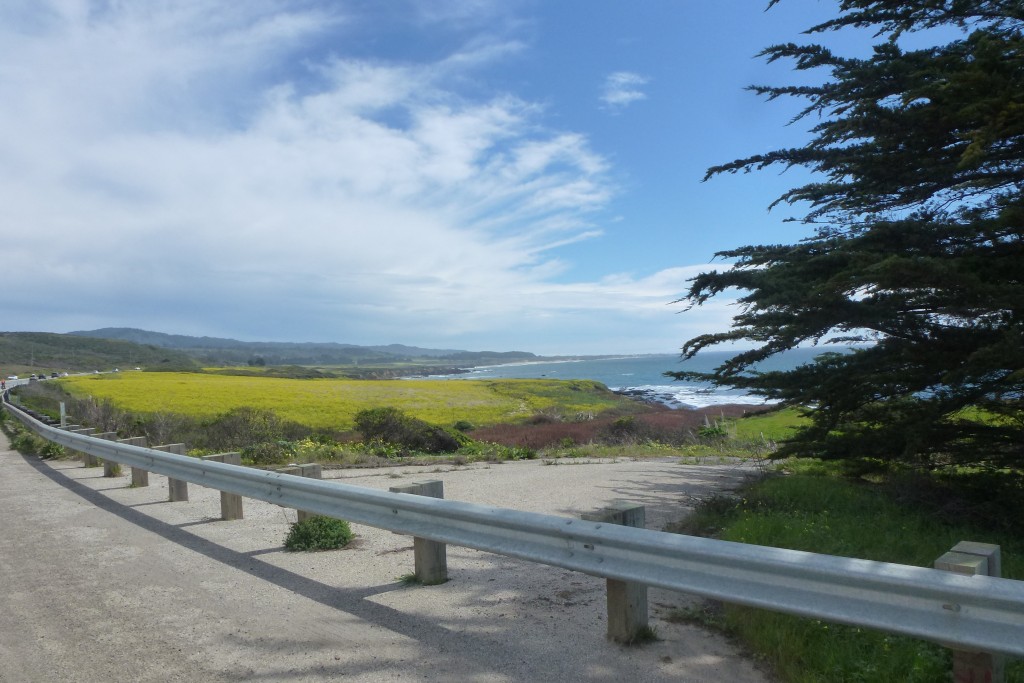 Leaving the tunnel we ranted and raved about the experience.  Continuing along we passed the California beaches we’d been expecting for a while, with folks swimming and sun-bathing and everything!

We continued along and arrived in Half Moon Bay, where we looked forward to using computers for writing and maybe a little trip planning.  Before we knew it the doors closed and we continued south- Almost…  A brilliant idea snuck into my head. Eureka! I suggested that instead of continuing onto Pescadero we stay at the state beach in Half Moon Bay.  The real draw here was the fire ring that we could cook our previously purchased veggie dogs in.  It was decided- we’d cut our day short for a fun night at a real hiker-biker camp.  Lizzy and I had a great fire under clear skies with a dead bush that we found- it’s cremation had been looming, so we went ahead and did the chore. One word for Hiker-Biker camp; luxury. 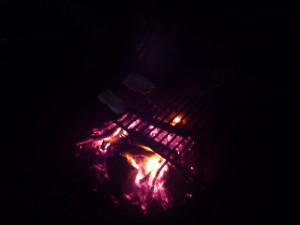 Fire caught in its tracks!!!

The next morning, after a breakfast of apples and bars we scooted off for Santa Cruz.  There we’d stay with Ericka, my friend from college, and her girlfriend Rebecca.  We were excited to have hosts-something to spice the trip up- and I hadn’t seen Ericka in nearly 2 years. 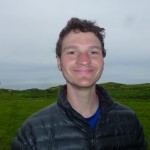 Very happy boy to be camping with fire

We rode through fields with headwinds that kept us working.  We stopped at the Pigeon Point Lighthouse after about 20 miles and complained about our butts hurting and the wind (and I about how I was COLD- it wasn’t actually cold, just windy and whiney).  After some snacks to revamp morale we continued south. 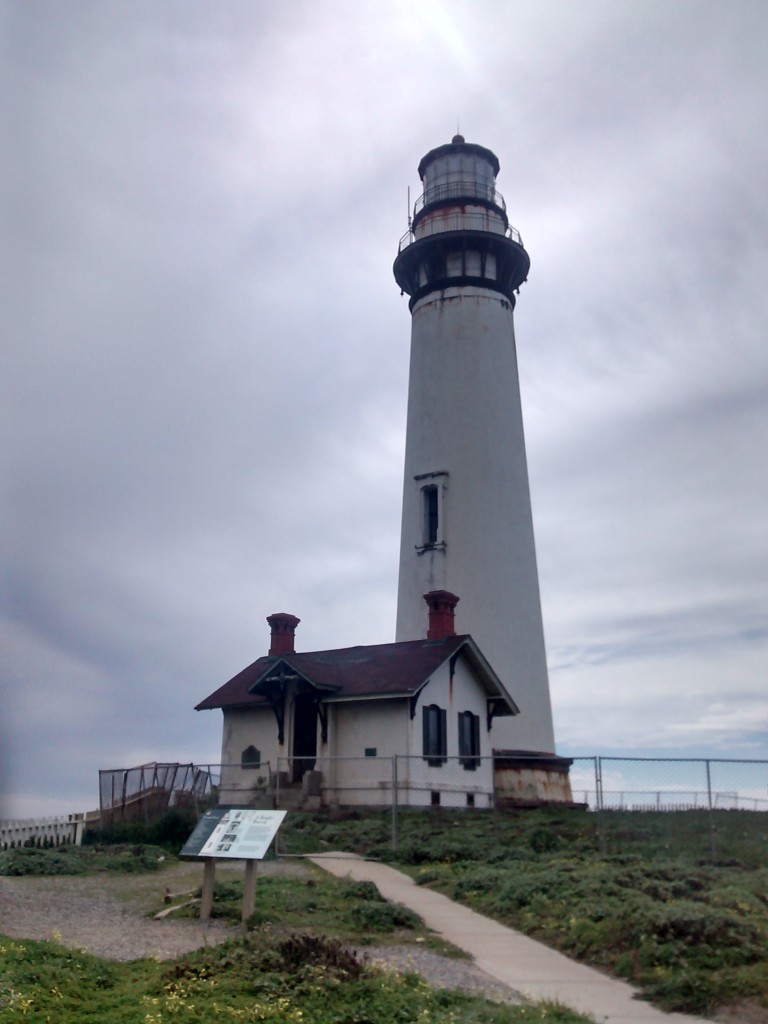 Ya’ll know what this is…

Similar to the day before we passed several beaches that told us we were in California- surprisingly, even on this partly cloudy and windy day, the beaches were full of die-hard Californians.  The day seemed full of cliffs and beach on the right and agriculture mixed in on the left.  At Davenport, about 15 miles from our destination, we stopped in a market to look for sweet deals and maybe reapply our new sunscreen.  We headed off with a couple bags of skittles for our final stretch before Santa Cruz. 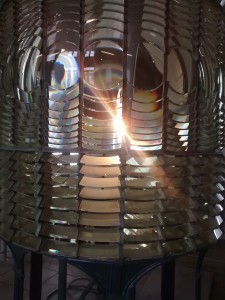 Fresnel lens that was used at Pigeon Point in the past. STATE OF THE ART during its age.

Something truly incredible happened as Lizzy and I were biking south along a townless stretch of the 1.  Looking out into the vast ocean beyond 100 feet of fields we saw a massive whale breach the surface of the ocean.  We both stopped in amazement, with truly unbounded excitement about what we’d just seen.  Luckily it breached again and several times more over the next few minutes.  We saw others spouting; a group must have been traveling together (I bet whales do this…).  From what we could tell it was a Gray Whale, especially considering that our friend Ariel said that they were currently migrating south.  I say this a lot, but this was a very special moment.  After 10 minutes or so of amazement we continued into Santa Cruz to meet with our friends. 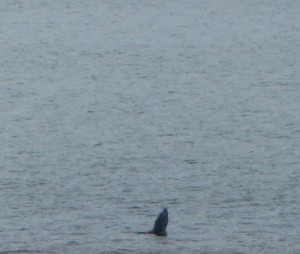 After examining some maps on my phone and very specific directions that Ericka had sent me, we found her house and met Rebecca (Ericka was out fishing for a little while longer).  Lizzy and I took turns showering as we chatted with Rebecca about her year-long AmeriCorps position as a Watershed Steward.  We also learned about the restoration event (i.e. noxious weed pulling) that she was putting on the next day, it sounded like a pretty sweet deal.  It made me happy to see Ericka after so long, a rather genuine person.  Ericka and Rebecca were so generous, and made us a wonderful home-cooked meal of chili and cornbread (vegan cornbread- thank you!).  You could taste the love in that chili from a mile away. 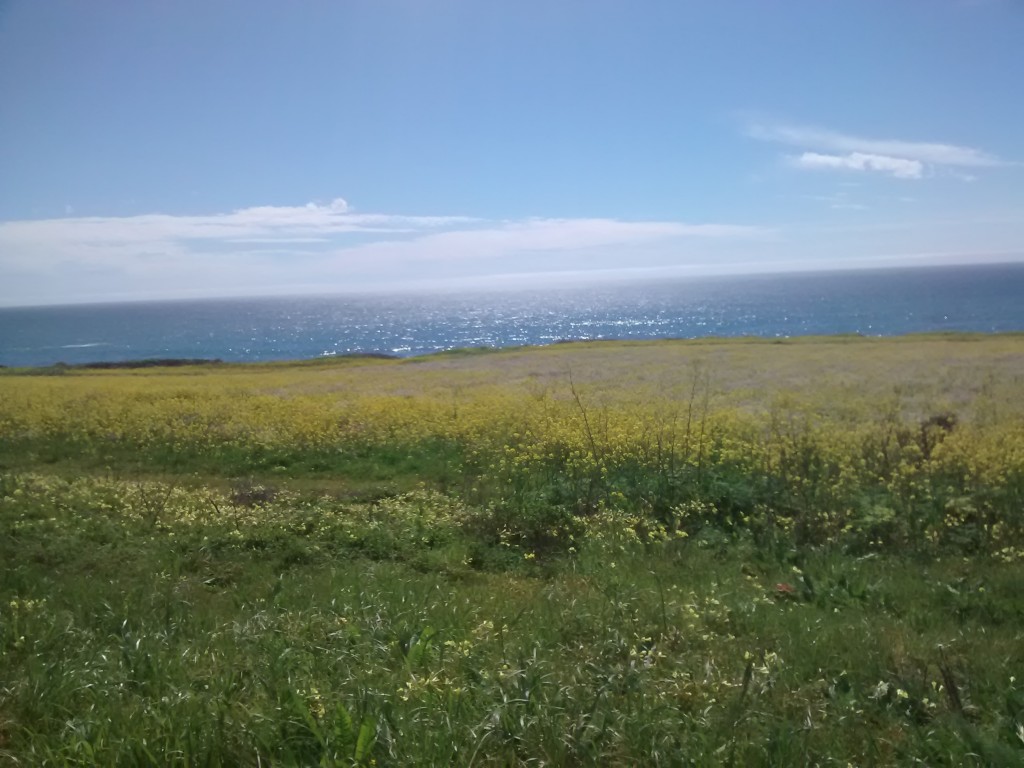 Fields that we saw the whales beyond

We headed out to a local brewery to meet with some of our host’s AmeriCorps friends and enjoy a beer.  Lizzy and I talked with a man at the bar that was very interested in what we were doing- excitedly amazed might be the best way to describe him.  We thought cocaine maybe, or perhaps just a lot of energy.  We learned from Ericka which Laundromat in town was the least weird and that were was a GROCERY OUTLET just blocks from the Laundromat.  With a plan for the next day we headed back to Ericka-and-Rebecca’s and settled into our pull-out-couch-paradise.  We slept well that night after finishing the chili leftovers and catching up on our journaling.  A great day of cycling followed by a fun evening with friends.

From Somewhere in California, that’s all folks.  Stay tuned- we have a couple of very special days coming up…