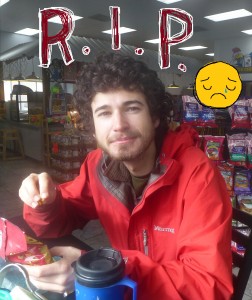 But he hasn’t died.

But we have considered making a small cardboard replica so that we may forever carry the spirit of his life with us on this journey. Still TBD. 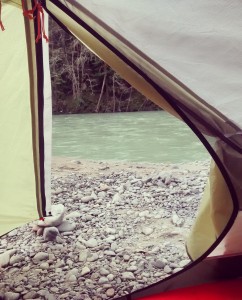 nice place to wake up.

Anyways, we all woke up on the bank of the south fork of the Eel River on the southern end of the Avenue of the Giants, our last morning together. We slowly packed and snacked and skipped rocks (some more successfully than others) and rolled our bikes back up to the main road.

We pedaled our way into the next town, Gaberville, excited to get coffee and maybe sit and write for a bit. Just as we got settled at a table in the Chevvron market, Kyle’s parents arrived outside. They had driven down 1-5 from McMinnville, leaving just the day before, and had already caught up with us (and also picked up a few of our forgotten items along the way, i.e. memory card for Tim’s camera that we left in a library in Arcata, and my helmet which I had accidentally/blissfully left outside a visitor’s center in the redwoods the day before).

They saved our items (thank you!!) and then saved our bellies, as in, they took us all out to breakfast/lunch (daylight savings is confusing. All I know is that I ate a veggie burger with fries and more condiments that you would be comfortable knowing about…). It was good to catch up, and share stories, and relax in a comfy booth, but soon enough our meal were gone, the condiment section nearly emptied, and it was time for us to split ways and get back on the road.

Ayways, we said our bye-bye’s and thank you’s to Kyle and his parents, Scott and Susan, (who also quite generously took some of our more bulky “winter”gear off our hands for us, destined to be back in McMinnville after a nice jaunt around the Napa valley (HOW ARE CARS SO DANG FAST??)) then rolled away, small tears forming at the corners of our eyes, not sure if they were forming from the loss of a comrade, or the wind from the speedy descents of the hills we spent climbing and plunging down the rest of the day. 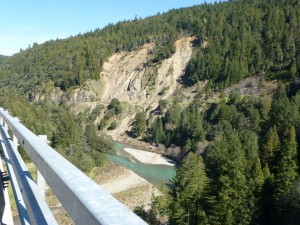 much climbing. such views.

For real though, the rest of the day we spent working our way up and down the mountainsides of inland northern California. We also spent the better half of the day worrying over how our upcoming plan to sneak through some gnarly landslide zones on Highway 1 would go.

We had heard from a local at the restaurant in Garberville that the roads were completely washed away on the closure at the junction we planned to take just north of Leggett. Tim had difficulty believing that a road could completely disappear after just one season of heavier than normal rains, so we opted to shoot for the stars rather than taking a longer, potentially more winding, route on Branscomb Road.

When we arrived, there were prominent signs displaying the large text “ROAD CLOSED AHEAD” “TURN BACK NOW!” “SAVE YOURSELVES!” (maybe not all of those warnings, but you get the vibe). We’d have to travel down a mile or two of descent before getting to the actual road closure, meaning, if we couldn’t sneak through, it’d be a sad sad climb back up, wasted miles weighing on us like an extra can of beans in our bags.

But these brave explorers are nothing if not stubborn (and untrusting of motorist’s opinions of road conditions). We sped down, and were met with barricades across the road, a backhoe, and a generator powering floodlights beaming on the redundant “Road Closed” signage.

The great thing about bicycles is the complete lack of having to follow the authority of The Man, for The Man drives a car, a great gas guzzling car, that would never fit between barricades, or be able to hide out past a No Parking point. Bikes are sneaky. Bikes are free.

So, we snuck, and snuck, and were worried about perhaps having to come face to face with the construction folks who might be working on the slide farther up the road, and how utterly horrible it would be to have to turn back then, several more miles invested into our less than legal undertaking.

The fact that it was (so thankfully perfectly coincidentally) a Sunday, did free our spirits a bit, hoping the crews would be off for the weekend, and we held hope. After much more climbing and falling, and many more miles risked, we saw two great heavy equipment machines once again blocking the path, and the ruddy muddy brown earth of the landslide, piled ten feet above road level on the path ahead of us. 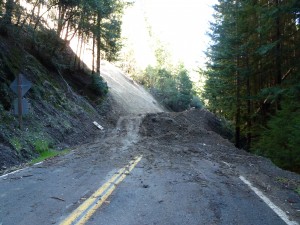 And the seats were empty, and the path was empty, and the roads were empty of cars. The heist has worked! we’d stolen miles and miles of winding, forested, perfectly carless roads, no detours routed motorists safely through, they’d need to take the godforsaken Branscomb Road we so harshly opposed. 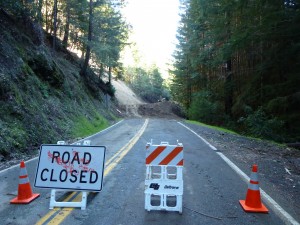 bye bye, looking back on our feat.

We walked our bikes between the machines and over the path of the slide and after twenty yards were right back on the 1, not a spot of dirt blocking our way.

WHAT JOY! WHAT RAPTURE! What miles came next were such a pleasure, climbing higher up till we reached a point that we must have coasted down the either side of the range for 10 or more, still utterly, completely, and freely, lacking in cars. 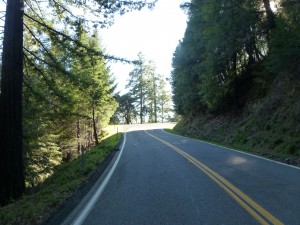 NO CARS!
MILES OF NO CARS!

Sorry. I’m getting a little carried away, but for real, we were some seriously passionately happy kids bicycling through those mountains. ugh, too pretty. just stop it.

We did some more climbing after our long descent, and at last, we turned the last corner and crested the last hill and came into full sight of the sun setting unimpeded over the wide horizon of ocean just ahead. 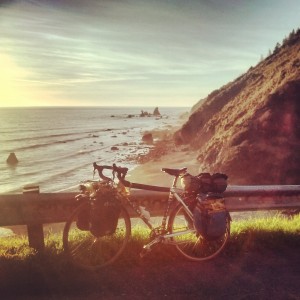 IT WAS SO PRETTY AND FULFILLING

As Timmy says everyday, it was a Very Special Day. 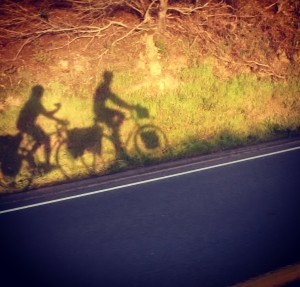 Riding on the west coast means maximum amount of sunlight in the evening.

We had thought to make it to Westport (perhaps for a congratulatory vege ice cream sando) but we tempted when we saw a closed campground overlooking the ocean right on our path a few more miles down the road. We lifted the bikes over a bit of fallen fence (more bicycle subtletry and freedom) and rolled about to the back side, less visible from the road, and having a better view over the cliffs below. 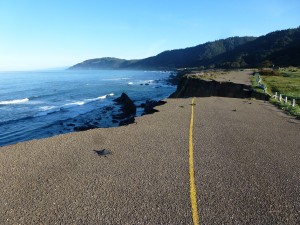 There was a road running right at the cliff’s edge, that we momentarily worried cars might also travel down, till we walked and noticed a few paces further that it had fallen right into the ocean and bothered us no more. 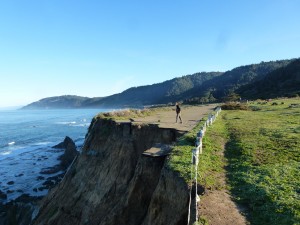 We set up camp and cooked our usual meal of beans and corn torts, wrote a bit by the moonlight, and climbed into our bags (and perhaps ate a candy bar in bed to celebrate the day’s accomplishments). 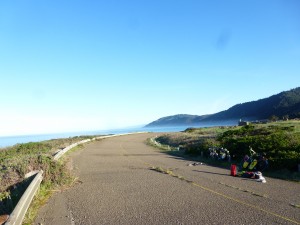 We slept well and woke to the sound of a jogger footsteps going past in the morning, and sleepily began packing up camp and preparing for a new day, still appreciating the wonder of the day before and the gorgeous view of the northern California coast.

We rolled through Westport, got some advice at a sweet old general store, cholk-full of a giant collection of rubber duckies, and finished making our way to nearby Fort Bragg, where rumor had it an internet cafe was still in existence (the library was closed for the day, and we wanted to computer it up to catch up a bit on the blog). We also only planned for a short day, wanting to go just eight miles further to Timmy’s friend Ariel’s house for the night in Mendocino.

We found the aforementioned internet cafe, after first worrying that the address listed had been taken over by a relish and hot dog shop, and spent the next couple of hours basking in the warmth of a computer screen and getting jittery from the delicious cups of coffee we were quickly guzzling down.

After typing our fill, we made our way to all three of the grocery stores in town, getting a treat from each (including the most perfect and wonderful vege ice cream sando surprise you ever did taste), and also perhaps scoping the dumpsters for unshelfable goods. (No luck, but I did find a licorice candy on the ground!) (also, unshelfable is totally a word. What does the squiggly red line mean again?) 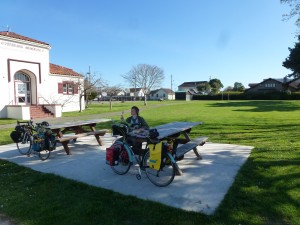 After that, we heading back north a bit (through a headwind, which meant our actual route had a TAILWIND!) to a small city park we’d seen on the map, to enjoy a bit of lunch and lounging. We munched, and Timmy walked over to the bathrooms after a bit, where he was immediately called a faggot by some punk ass California youths…

I walked over there afterwards to see how I would fare, and did no better, getting both a ‘faggot’ and a ‘wanna be hipster’. Excuse me, but my grubby clothing is one hundred percent authentic. We didn’t think of a great retort at the time (as always seems to be the case when encountering a bully), but later realized we had missed a great opportunity to use Kyle’s fool proof method of replying with, “Well that’s your opinion but why would you say something to hurt my feelings?” I’m sure that would have stopped them in their tracks.

Anyways, we left the youths to their games and headed back to the bike shop next to the café to fill up on site before we scooted the rest of the way to Ariel’s. While doing so, the first flat of the trip occurred as Timmy’s valve stem just popped completely out of the tube and all of the air came rushing out. Good thing he had a couple spare tubes, and soon after he replaced the faulty one, we were back on the road.

We had about 11 milesto googo and man did we book it! We flew down the road in no time, and even took a slight scenic route into town. 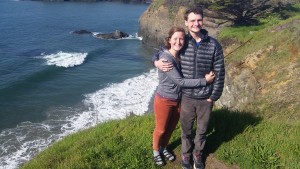 ARIEL IS A GOOD PERSON.

Getting up to Ariel’s house was a whole nother deal… Like all good hosts, she lives at the top of a series of increasingly step hills, and we were sweaty and out of breath by the time we reached her home. She came out and have our stinky bodies hugs quite gamely.

We them headed right out in her car to the cliffs to watch the sunset and watch for whales (which we sort of saw, but then just started pretending that seagulls were flying whales, of which we saw many). Afterwards, we hit the market for fresh veggies to make a dope stir fry, and headed home.

We all had a lovely time cooking and drinking good local beer and talking and joking (and showing and doing laundry). 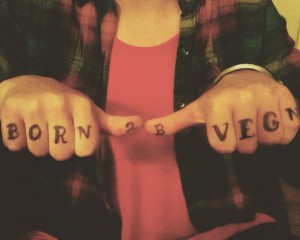 Anyways it was fun and relaxing and that’s where I’m ending my tale. Very anti-climatic. BUT STAY TUNED. I’M SURE SOMETHING HORRIBLE WILL HAPPEN TO US IN THE FUTURE. 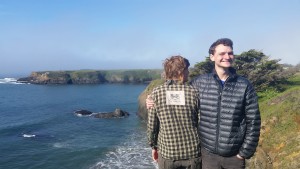